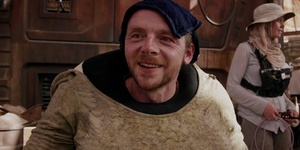 J.J. Abrams and the cast of the upcoming Star Wars: The Force Awakens absolutely took over Comic-Con yesterday, unveiling a behind-the-scenes video and even inviting all the attendees to a surprise concert behind the convention center, giving everyone a lightsaber in the process.
The new cast appeared for a panel, as did stars of the original films including Harrison Ford, Carrie Fischer and Mark Hamill.

Oh, and btw, Simon Pegg will play an alien.

Check out the video here: