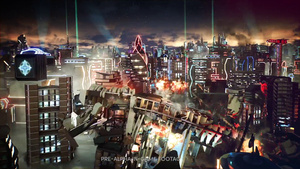 In this first look at Crackdown 3 we are shown a virtual environment vulnerable to total destruction at the player's will!
Microsoft and developer ReAgent gave a first glimpse of Crackdown 3 at Gamescom 2015 earlier today, in which we can see entire buildings being demolished and causing considerable destruction to their surroundings. The game will feature 100 percent destructible environments, we are told.

Give the video from Gamescon a view.

Nothing special about Xbox One over the 360 or PS4 over the PS3 either. Marketing ploy. Graphics virtually identical.

The cloud computing seems pointless without a really good connection like optical.