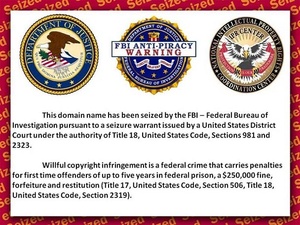 The FBI has seized two domains belonging to popular sites to find pre-release music.
Both ShareBeast and AlbumJams now have the FBI/DOJ takedown banner and the RIAA was quick to boast of the shutdown of the sites.

According to the RIAA, the Sharebeast network of sites had a massive library of tracks, including thousands of "pre-release leaks." The RIAA added that they submitted DMCA takedown notices for over 100,000 songs on ShareBeast alone.

"Millions of users accessed songs from Sharebeast each month without one penny of compensation going to countless artists, songwriters, labels and others who created the music," said the statement. "We are grateful to the FBI and the Department of Justice for its strong stand against Sharebeast and for recognizing that these types of illicit sites wreak major damage on the music community and hinder fans' legitimate listening options."

While ShareBeast certainly was popular, it paled in comparison to heavy hitters like Torrentz.eu in popularity and files available.

As for taking sites like this one down, I'm kinda backing this as the artists to need time for the music to be announced then released to create awareness. Once released though......it's fair game getting those mp3s however you want. The real money for musicians is in touring, plain and simple. A 35 dollar T-shirt that they bought for a buck a piece is how they make a living, NOT through album sales.
319.9.2015 22:34
Mr-Movies
Send private message to this user
Senior Member

It's the Labels here that are worried, the artists don't hardly get shit from music sales compared to the Simon's of the world. Like Heame says it's the concerts were they make their money.