Recent headlines | Google Pay wants to be your bank, too
AfterDawn > News > 4chan has been sold

4chan has been sold 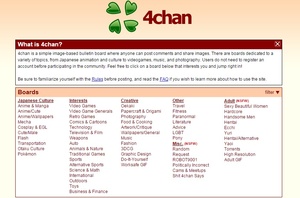 Christopher Poole, the founder of anonymous message board 4chan, has sold the company to another pioneer in the anonymous destination community.
Poole, who started the site in 2003, has sold 4chan to Hiroyuki Nishimura, the founder of 2Channel - an early anonymous board based on anime and the Japanese culture.

"Hiroyuki is literally the only person in the world with as much if not more experience than myself in running an anonymous, large destination community that serves tens of millions of people," Poole noted. "He's the great-grandfather of all of this."

While 4chan is popular, it has never reached the popularity of sites like reddit, which are worth millions and have been gravitating towards becoming real businesses while 4chan has admittedly remained more of a hobby site.

Nishimura, for his part, was very happy to own the site. "I'm proud to be taking Mr. Poole's place as the owner of 4chan. I've long admired 4chan's place on the web as a producer of anonymous and Internet culture, and look forward to continuing to grow and develop the site and support the community."

... Isn't Nishimura the scumbag who was selling 2ch user's information?

4chan is and always has been the underbelly of the internet. Well, them and the yahoo comment sections.