Recent headlines | There is one country where Chrome is not the most popular 1
AfterDawn > News > HTML5 replacing Flash? BBC is latest to edge away

HTML5 replacing Flash? BBC is latest to edge away 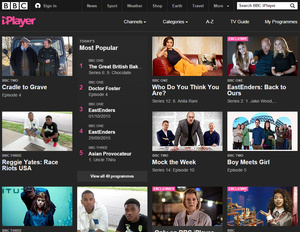 Why is everybody seemingly running with open arms to HTML5, and away from Adobe Flash?
Back in 2007, it was considered a drawback that Apple would snub Adobe's Flash plugin in the browser on its brand new iPhone, and it would later continue to ignore Flash products in future iPhones, iPods and iPads. Adobe even stated that Apple's decision meant that users were being denied a full web experience, citing the extremely high rate of Flash support on Desktop web browsers and its use on millions of webpages.

It wasn't until 2010 that Steve Jobs explained to customers why Flash won't be supported in Apple's mobile products. Chief among Jobs' concerns were the proprietary nature of Flash, its chequered security track record and its efficiency for video playback. Jobs' favoured the comparably open HTML5 standard to Flash, and the advantage of hardware decoding for H.264 video (which Flash supported by then, but hardware decoding support was inconsistent between sites).

Security concerns stood out for Jobs for good reason. The Adobe Flash plugin for major web browsers has been a consistent target for hackers seeking vulnerabilities as a means to attack web users. New Adobe Flash security flaws are still very common, and it seems Adobe is in a constant race to save the image of Flash.

Earlier this year, Mozilla temporarily disabled the Flash plugin by default in its browsers because of security flaws, reversing the move later when fixes were available. Google also decided to implement changes in Chrome that will pause Flash elements that aren't part of a webpage's core content.

The big boys are snubbing Flash!

On the content side, Flash is being pushed out by an increasing number of platforms and sites. YouTube now streams its videos with a HTML5 player by default, for example. Facebook still shows some videos in Flash, but it won't help Adobe that Alex Stamos, Chief Security Officer (CSO) at Facebook believes that Adobe needs to kill Flash.

It is time for Adobe to announce the end-of-life date for Flash and to ask the browsers to set killbits on the same day.


BBC iPlayer - a tremendously popular video content platform in the UK - is also set to welcome HTML5 with open arms at the inevitable expense of Flash. It is currently testing a beta of a HTML5 player that iPlayer viewers can check out by visiting a HTML5 Player beta page.

Should you keep Flash?

Flash is not likely to be dead any time soon. It is still used to deliver video content by several major platforms on some browsers and there are still many Flash-based games played in-browser. It is also used for a lot of interactive / video advertisements.

All that said, it has definitely declined in necessity for the average web user, to the point that completely removing the plug-in and software from your device is not likely to harm your web experience all that much, and let's be honest, it would eliminate one routinely-exploited attack vector.

Even as Flash updates are pushed out in response to discoveries of vulnerabilities, many users can still be left at risk because they haven't updated the plug-in. Then there's performance, where you may not want Flash videos to automatically start playing when you load a webpage, for example.

A good middle-ground proposal would be to stop Flash content from loading automatically in a browser. You can do this in Chrome, for example, by going to chrome://settings/content and changing "Plug-ins" to "Let me choose when to run plug-in content". 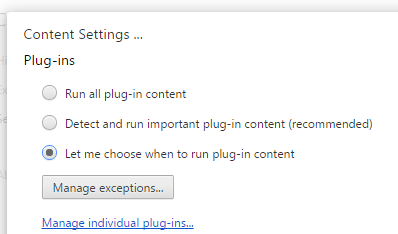 After the change, you would need to right-click on greyed-out Flash content to play it manually. The recommended option (Detect and run important plug-in content) works well too, but may still load certain things you don't want (like auto-play videos).

The BBC won't be the last to flirt with HTML5 video players and developers of Flash games may be tempted to retreat too in time.

As an 18 year tenured veteran in IT and a leading network engineer, I can say with certainty where the article headlines using a question mark, FLASH IS IMMINENTLY DEAD!

It's been a problem for a decade now and long overdue to be replaced.
Java too. These two programs have caused LIKELY 80+ percent of the world's malware, viruses and other malicious software. One click of web link and that's it...program running to do what it does.


While I'm not a programmer, I hope that HTML5 is more open-source to bring about a variety of exploit-resistant solutions...rather than the single target and rarely fixed Flash/Java driven and restricted by money and money only.

I'm so anti Adobe though. That company sucks and devs crap software that is heavy, and bloated. Their CS suite is the only decent thing they have........PERIOD!

Most do have HTML 5 but only for mobile in those cases. Most stick to flash by default. If you disable flash and change your user agent to a mobile one but as a tablet like an iPad, you will probably get their HTML 5 player if they have one.

Quote: Their CS suite is the only decent thing they have........PERIOD!

Their CS suite includes Flash. Always has since the acquisition of Macromedia.

I think Flash and others are not necessarily dead because I think they will still be used to create decent stand-alone apps, including ones that convert for mobile. Tons of games for iOS and Android have been made using Flash. It is similar to how a lot of games use Unity.

Flash in the browser is not gone because plugins are not gone yet. And the next plugin is going to be Unity until browsers catch up. Just like Flash had incredible performance for vector graphics compared to all alternatives at the time.