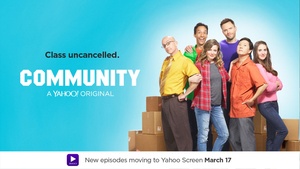 Yahoo has confirmed this week that its plan to jump into the original streaming content business has not gone as planned.
During their recent earnings call, the company noted a $42 million write-down for its video division. "We thought long and hard about it," noted Yahoo CFO Ken Goldman. "What we concluded is [that] certain of our original video content, we couldn't see a way to make money over time. I'm thinking of Community, I'm thinking of Sin City Saints and so forth. So there, where we had spent money and had some assets on our balance sheet, we elected to write those off."

Community, which was a hit on NBC in its earlier seasons, was renewed for a final season on Yahoo, but Yahoo's service was not as easy to access compared to longstanding apps and services like Hulu and Netflix and it appears that Yahoo could not profit on the shows popularity.

Goldman agreed the streaming content did not go as planned but he did not rule out the company trying again in the future.

Not surprised. Yahoo! has become irrelevant and untrustworthy.....except their email, which is merely an alias email I use on a rare occasion.

If Yahoo! closed its doors, it would not likely be missed much.