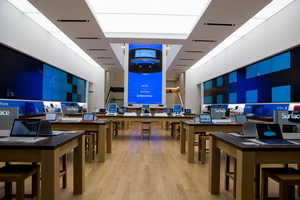 Microsoft has taken to New York City for their new flagship store, opening the store at 677 Fifth Ave.
The store will showcase the company's hardware, including the new hit Surface Book notebook, the latest Lumia 950 smartphones and new Surface Pro tablets. In addition, the company will also showcase the Xbox One and its Microsoft Band fitness tracker.

Microsoft is said to have been looking for an NYC flagship since 2009, but the time was just not right until now.

The store will be five stories, and include 84-inch TVs to play Xbox games on, a full "community theater" with hours of workshops every week, a full floor dedicated to Dell-built Windows devices, and a full floor for employees and meetings and events.

According to early real estate estimates, Microsoft could be paying a fortune for the space. Rental prices go for as high as $3,350 a square foot on Fifth Avenue, and the new flagship is over 20,000 square feet.

Tweet
Tags: microsoft store Microsoft Surface Book
<Chase announces its own digital wallet service >Microsoft confirms that the rumored Surface Mini tablet was real
Previous Next
Comments have been disabled for this article.