Android Marshmallow is now on 0.3 percent of devices 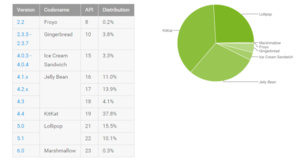 Google has released its updated platform numbers for the end of October, with Android Marshmallow making its first appearance following the launch of the Nexus 6P and Nexus 5X.
In addition to the new Nexus phones, the Nexus 6 also got the update to Marshmallow, which is officially 6.0.

KitKat (4.4) and Lollipop (5.0/5.1) remained the big winners, at 37.8 percent and 25.6 percent respectively, but quite a few older versions still have respectable numbers. Google's ultimate goal is to have everyone using the same operating system, but there are too many older phones out there that aren't upgradeable.

Check the full numbers here.
Tweet
Tags: Android Android Marshmallow
<Report: Google looking to co-develop their own Android chips >Live-action 'Warcraft' film has its first trailer
Previous Next Write a comment
Comments have been disabled for this article.