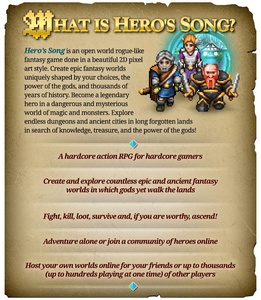 John Smedley, the former chief of Sony Online Entertainment, has co-founded his own studio.
Pixelmage Games is already working on its first title, 'Hero's Song,' an RPG that 'revolves around a system of gods that shape the world' with the ultimate goal of becoming a god yourself.

The title will have a solo campaign and multiplayer online, as well.

To date, the company has raised $1 million from investors and it hopes for $800,000 from Kickstarter. Pixelmage also employs Everquest co-creator Bill Trost and fantasy author Patrick Rothfuss.

If you are willing to gamble on the game, a $25 Kickstarter donation gets you the game by the end of the year.