WeChat has over 700 million MAUs 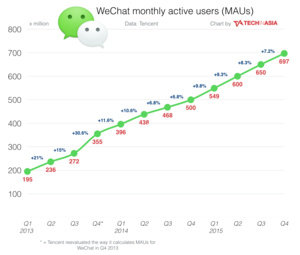 WeChat, China's most popular messaging app, now has over 700 million monthly active users.
In the last 12 months, the company added 200 million active users, showing that their growth is not slowing down one bit. By the end of December, the company reported 697 million MAUs, but it is fair to suggest they have added over 3 million in the last three months.

The growth comes as WeChat has expanded their mobile payments in mainland China. The company reported $46.1 million in bank handling fees for the month of January, alone.

Source:
TechInAsia
Tweet
Tags: WeChat Messaging App
<Are these the first images of the Nintendo NX controller? >Toshiba announces $6 billion asset sale
Previous Next
Comments have been disabled for this article.