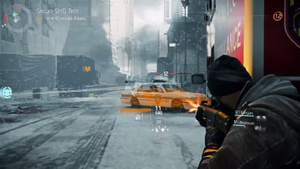 Ubisoft is aware of issues players of Tom Clancy's The Division are having with their agents disappearing, and promises it will bring them back.
Players develop their agent characters over time as they play the online game, and so many people were shocked when their built-up characters suddenly disappeared altogether. The problem seemed to effect the Xbox One version exclusively.

Ubisoft confirmed that there was a problem and has already fixed it.

"The issue was caused by a malfunctioning server that couldn't synchronise character data correctly and corrupted them instead. The game client was unable to read this corrupted data, and simply assumed that the character didn't exist," the developer told the BBC News website.

The server has since been restored to normal functions so the issue won't affect any new players, and those who have been affected are assured that the character is not gone and a fix will be available shortly to restore them.

While The Division had a relatively stable launch, problems arose when an update (v1.1) was pushed out to players.
Tweet
Tags: Tom Clancy's The Division
<Gears of War 4 trailer brings nostalgia, excitement to fans >WATCH: Guy plays Flappy Bird and Snake on e-cigarette, and so can you
Previous Next Write a comment
Comments have been disabled for this article.