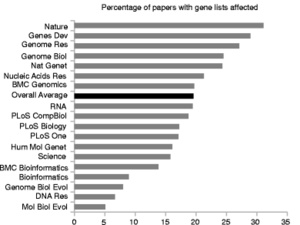 A Melbourne-based institute has demonstrated that a feature of Microsoft's Excel spreadsheet software has resulted in errors in scientific papers on the subject of genomics.
The problem has been known for over a decade in the scientific community and it is fairly simple to understand. The problem arises when Excel, with default settings, converts gene symbols into Calendar dates. For example, Septin 2 can be written as SEPT2, which Excel will automatically change into "September 2" using its default settings.

Despite the issue being noted by the scientific community in 2004, the problem has not only persisted but has gotten worse. The study, conducted by Baker IDI, notes that the instances of the problem have increased at an annual rate of 15 percent over the past five years alone.

After scanning through 3,597 published scientific papers, the researchers found that 704 of them contained gene naming errors created by Excel, or possibly by a number of similar software with the same feature, including OpenOffice Calc.

The feature that turns entries into Caldendar dates can be turned off in the Excel settings quite easily.

Yeah......sorry all but this problem increasing 15% is PURELY the result of a 15% increase in non-thinkers and dumbasses that are solely relying on autocorrect.

Microsoft clearly is expecting the basic intelligence and thoroughness of people creating these genomics papers to check your spelling BEFORE submitting. Period!

Excel underlines immediately after typing this stuff out.

People need to do their due diligence and MS should truly ignore this as they have been doing for over a decade now.

There is no excuse for being a non-thinking idiot! Sadly, that's how the youth is today. I'm only 43 man but my head is NOT up my ass except once in a blue moon...and I deserve whatever comes my way as a result......that way I can learn from it.

Quote: The feature that turns entries into Caldendar dates can be turned off in the Excel settings quite easily.

Actually, there is no way to turn it off. You can turn it off for specific cells but it turns back on if you paste data into those cells...except it doesn't always do that for some reason, so you test it and it works fine and then you copy 10,000 lines from another program and a few of them turn to dates off screen! Plus, if you then change those cells back to text, you get a random 5-digit number instead of the date or the original input. Microsoft could fix this with a check box in the settings somewhere but they have not bothered for over 10 years! It is annoying for a lot more than just gene symbols...it turns all sorts of things into dates or formulas. The best solution I've found is to import TXT files using the Open command, as this lets me force everything to be text...then I end up with a dozen files that I can copy and paste into one. Hardly an ideal solution, and I had to figure that out by trial and error since Microsoft doesn't tell anyone because Microsoft doesn't care.

As for expecting people to "check spelling" on 1,000,000 cells that were all correct before the copy and paste, if you think that is reasonable, you are the one with his head up his ***. It is an easy fix...add a checkbox that turns off a feature that most people don't want. Is that really so hard? Is making a program faster and easier to use really that low of a priority for a company that built itself on making computers easy to use? I shouldn't have to use Notepad to make a piece of non-beta commercial software work correctly, especially if that piece of software is basically a complex text editor!
Comments have been disabled for this article.