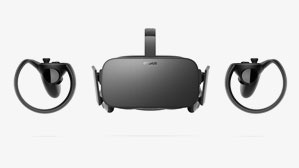 Speaking during their Oculus Connect keynote, the VR pioneer has announced that the Oculus Touch controller will launch on December 6th for $199.
The controller will come bundled with VR Sports Challenge and The Unspoken, as well as a secondary camera that gamers can place in their play area.

In addition, if you would like a third sensor that allows the Touch controller to room scale, Oculus is selling it separately for $79 starting on the same date.

If you are interested, check out the Rift and the Touch here: Oculus

Tweet
Tags: Oculus VR Oculus Rift Oculus Touch
<Verizon wants to drop their buy price of Yahoo by $1 billion following scandal >If you're a Comcast customer, you now have a data cap
Previous Next

279.00 for a controller that should be made for free for current owners lets see how well your poor sales get poorer and worse at just 399.00 i could get a playstation vr headset hack it and tell you to go sit and spin.