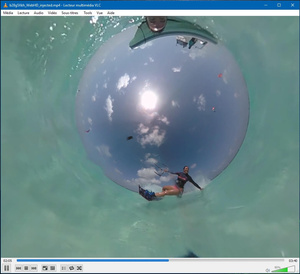 If there's something that VLC can't play, I haven't been told about it. The media player developed by VideoLAN has been proud to support the widest variety of video and photo formats for a long time. Now the company has added support for 360 degree videos.
VLC's new 3.0 versio will be launched in just couple of days but the company has released a preview version, which lets you try the newest feature. The feature allows PC and Mac users to view 360 degree videos and photos as well as panoramas.

You can navigate the picture with either keyboard or mouse just like in Google Maps Street View for example. VideoLAN's 360 website includes even a few sample videos and a panorama from Giroptic to try out the feature.

The company promises to deliver the same feature later on for mobile devices and to support VR headsets like HTC Vive, Google Daydream, and Oculus Rift in the future.
Tweet
Tags: VLC
<Netflix brings 4K to PC, but only if you have the right PC >Microsoft is working on a major design update for Windows
Previous Next Write a comment
Comments have been disabled for this article.