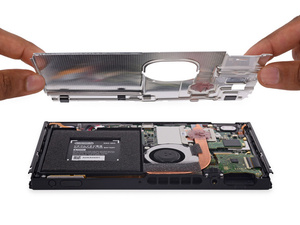 iFixit has once again documented a teardown of a popular new consumer electronics product; this time the Nintendo Switch, a Joy-Con controller and the Dock.
The Switch looks more or less what you'd expect to see, much like the inside of a laptop with a familiar looking heat pipe, thermal paste and so on. What is interesting is the metal plate which lays on top of the components appears to double as a heat sink, which channels heat from the heat pipe (though a purple blob of thermal paste) to the rear case (pictured).

Visit the detailed iFixit Nintendo Switch teardown to see more (including xray shots), and to learn to what extent the Switch was built with repairing in mind.

Also, watch the accompanied video below.