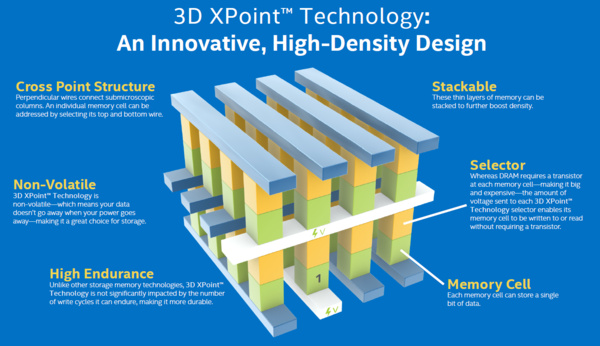 Intel and Micron have been promoting their new 3D Xpoint memory technology for a long time. Finally the technology is close to landing in computers and portable devices.
The technology will first be adopted by Intel's own server and business setups with the new Optane memories. Also the world's largest PC manufacturer Lenovo has announced previously that it will give some of its laptops a new hybrid drive which will include a small Optane drive.

3D Xpoint is said to be nearly as fast as a DRAM type memory, but the memory density is four times larger. Even if it might be as fast as some RAM memories it is not meant to replace them but instead give a huge speed boost to SSD and hybrid drives that are currently using NAND technology.

As you might imagine all this advancement in SSDs is not going to be cheap. For example, a 375 GB Optane SSD DC P4800X costs over $1500 without sales tax, so you'll have to wait a little while before mass markets are going to be adopting it.

However, for people that are interested in the performance of the new type of memory, and might even have use for it in servers or other business settings, AnandTech has an in-depth article, albeit crippled by Intel's policies a bit, about the aforementioned P4800X Optane SSD.

Those number are pretty impressive. The price is still too high...but considering that it is basically able to operate as half-speed non-volatile ram, the price makes a bit more sense. If Intel can bring themselves to offer this to the general public for a good price without crippling it, we could see some big changes in the way that software is written. We could also see Intel become a monopoly in the SSD market.