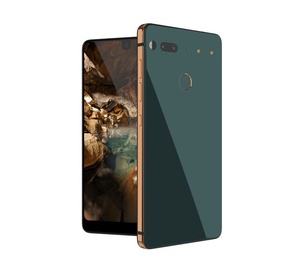 Andy Rubin, the man who originally created the Android operating system, has been developing his own phone for some time now. The Verge finally got the final details and pictures of the product, called The Essential Phone.
The Essential Phone is everything you'd expect from a modern flagship Android phone: edge-to-edge display, minimalistic unibody design, massive storage, etc..

The exact specs that are known by now:


Only real nag with the specs is the fact that phone wont have 3.5mm audio jack, following the footsteps of Apple's iPhone.

Phone will be available at U.S. first, with the price tag of $699. Radio internals are supposed to be compatible with all U.S. operators. When exactly the phone will be available for sale isn't known yet.
Tweet
Tags: Android Andy Rubin The Essential Phone
<Spotify was hacked! Check here if your Spotify account details were leaked >Intel unveils new Core X series with a super powerful Core i9 Extreme
Previous Next
Comments have been disabled for this article.