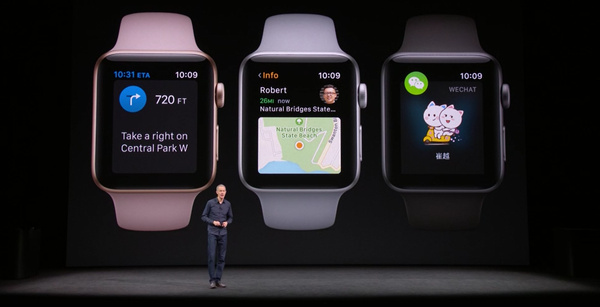 Several reviewers have found a problem with the new Apple Watch Series 3 and LTE connectivity, which Apple says it is investigating.
The ability to connect directly to an LTE network and break free from iPhone tethering was probably the biggest selling point of the Apple Watch Series 3 unveil last week. It promised a smartwatch that can stand on its own and work more or less anywhere an LTE-capable cell phone could.

However, according to reviewers at The Verge and the Wall Street Journal, the new Watch seems to have a problem with LTE connectivity. Writing for The Verge, Lauren Goode found that the device frequently struggled to connect to LTE and would often connect to unknown wireless networks.

In a review for the Wall Street Journal, Joanna Stern summed up the problem in the headline: Apple Watch Series 3 Review: Untethered... and Unreliable.

This is bad news for those who would like the smartwatch but had previously held off a purchase because of the required tethering.

Apple has responded however, telling the Verge that it had discovered an issue with the Watch Series 3 connecting to unauthenticated WiFi networks without connectivity, and that it seemed to affect the device's ability to use cellular networks. It promised to alleviate the issue by software update.

Wait, let me see if I'm getting this right, so the Watch 3 will automatically connect to unknown wifi networks and that will somehow screw up its ability to use cellular data? If I'm understanding this right, the user can fix it by simply turning off the option "Ask to Join Networks" under Settings -> Wi-fi.
That tells the Watch not to scan for unknown wifi networks, yes?

You're not getting this right. The articles linked mention that the watch attempted to link to unknown networks with no internet connectivity instead of known-strong LTE; in fact, doing so prevents the watch from connecting to LTE at all.

From the top linked article:


Quote: Eventually, the company issued an official statement, acknowledging the issue. “We have discovered that when Apple Watch Series 3 joins unauthenticated Wi-Fi networks without connectivity, it may at times prevent the watch from using cellular,” an Apple spokesperson said in an emailed statement. “We are investigating a fix for a future software release.”

This is genuinely unsurprising and generally expected from time to time.

It'll get remedied soon enough....don't you all get your panties in a bunch!

No one here but you has an underwear chafing issue. And yes, we're aware Apple won't leave it as-is.