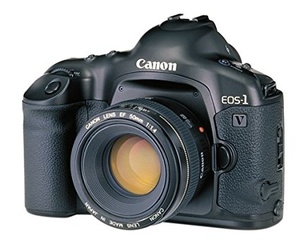 Canon, one of the more iconic camera companies, has been selling imaging products for 80 years. The company started in Japan before the World War II under the name Precision Optical Industry Co. and produced a film camera, The Kwanon, that was perhaps an omen of the company's future name.
Now nearly two decades ago company released its first digital camera for the consumers, and eight years ago it discontinued development of film cameras altogether. Nevetheless, there's still been some Canon film cameras for sale until this day.

Today Canon has officially stopped selling the last of their film cameras, EOS-1V. In a statement the company says that it will still provide repair for the camera until 2025.

EOS-1V is the predecessor to Canon's popular line of professional digital SLR cameras, EOS-1D, the latest of which is the over $5,000 Canon 1D X Mk II. The EOS moniker comes from Electro-Optical System, if you didn't know, and it first made the jump from mechanical lenses to electronic ones.

Obviously if you still want one you can go on on eBay and get yourself a used one for a few hundred bucks. Perhaps it'll become a collector's item at some point.

Canon is stopping sales of film cameras because they didn't go after the high-end. I know $5k is a lot for a 35mm camera, especially when the effective resolution is only about 30MP with good film...but that doesn't make it high end. There are still 70mm film cameras out there worth $500,000+...and there probably will be for a long time given that digital quality isn't growing nearly as fast as it once was.

Hey, I too have one canon film camera being a collector item from my father. Feeling good to have it after hearing this news. Also I prefer canon quality over other digital cameras too being it for normal digi camera to 35mm DSLR I am using.