Recent headlines | Guide: How to Kick Unwanted Guests from Your Netflix Account 1
AfterDawn > News > Microsoft to release next-gen Xbox in 2020?

Microsoft to release next-gen Xbox in 2020? 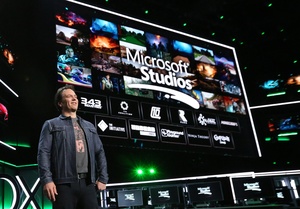 According to sources cited by Thurrott, that's exactly what the new hardware is. It reports that Microsoft is developing its next generation Xbox hardware, codenamed Scarlett, and that it will be released in 2020. Moreover, the sources describe Scarltt as a "family of devices."

As you would expect, no technical details or any other clues were shared. Microsoft launched its previous Xbox generations in the month of November, suggesting that November 2020 is the likely target date. This would mark eight years between the launch of the Xbox One (November 2013) and the next generation hardware. Xbox One also launched eight years after the November 2005 debut of the Xbox 360.

Let's make this clear; there was very little to be considered "next generation" on the leap from Xbox 360 to an Xbox One. There were even less noticeable and necessary differences between the fluff released thereafter like the One S and then there's the One X.......an absolute filthy waste of wasting. Nothing new in it, 4K gaming is a stupid fad and no one takes it all that seriously. 1080p gaming is where it's at. More power doesn't mean better graphics with consoles.

Anything MS thinks is "next gen" (such a stupid trendy fad term) would have to seriously surpass that of of the PC's capabilities/graphics and that just ain't happening so hopefully most won't buy into Microsoft's claims of "next gen" anything.

MOVE ALONG PEOPLE...NOTHING TO SEE HERE!