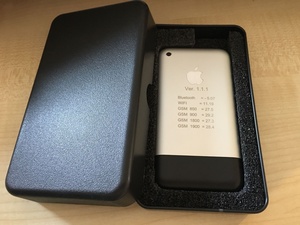 A very rare prototype model of the first Apple iPhone is up for auction on eBay, quickly hitting bits in the five figures and drawing media interest.
While prototype Apple gear is seen now and then on auction websites, this model is definitely different. According to the listing and other materials, it is a 2006-era prototype model. It runs a very early version of Apple's iOS (or iPhone OS then) to test the prototype hardware.

In addition to the special software, each radio signal bands are etched into the device's rear housing. Bluetooth, Wi-Fi, and each of the original iPhone's four supported GSM bands are accounted for.

The seller has noted the differences between this rare prototype and the mass produced first generation iPhone, which was released in 2007:
At the time of writing, the highest bit stands at $12,500.00 after 66 bids.

Via: 9to5Mac
Tweet
Tags: iPhone Apple
<Toyota to invest $500 million in Uber >White Xbox One X and Elite Wireless Controller coming soon
Previous Next
Comments have been disabled for this article.