Xbox One can be controlled by Cortana, Alexa devices 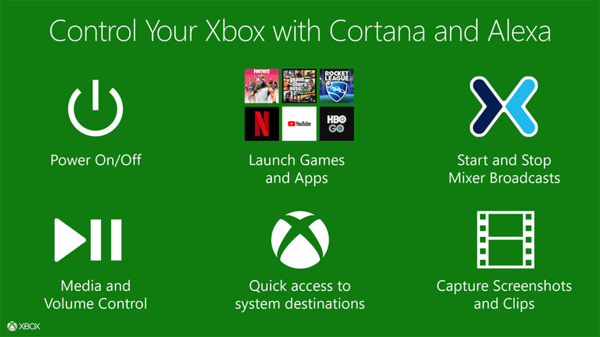 Microsoft is making it possible to control your Xbox One console using Cortana and Alexa voice commands.
For Kinect users and those with compatible headsets, controlling an Xbox console with voice commands is nothing all that new. However, for those who never had Kinect and work with Alexa or Cortana-enabled devices, the new Xbox Skill will be welcomed.

It allows users to interact with Xbox One using voice commands through your Cortana and Alexa-enabled devices. Compatible devices include a Windows 10 PC, Amazon Echo, Harman Kardon Invoke, Sonos One, or Cortana and Alexa apps on iOS and Android.

For the time being, the Xbox Skill feature is only available to those who are part of the Insider preview. Once working, you could just say "Alexa, start Rocket League." and this command will automatically turn on your console, sign you in, and launch your game.

If the Digital Assistant setting is visible on your console in Settings -> Devices, then you are currently eligible to test the Xbox Skill.

To take part with Cortana, use this link from your Windows PC. For Alexa, use this link instead.
Tweet
Tags: Alexa Cortana Xbox One
<U.S. charges North Korean over Sony hack, WannaCry malware >Oculus Rift users can now shop at Vive store
Previous Next
Comments have been disabled for this article.