Recent headlines | Samsung Android 12 update timeline - when your phone will get it 1
AfterDawn > News > DisplayPort 2.0 comes with beyond-8K support 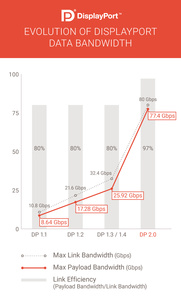 As with the previous iteration, DisplayPort 2.0 functions either over a USB-C connector, or the native DP connector.

DP 2.0 is backward compatible with previous versions of DisplayPort and incorporates all of the key features of DP 1.4a, including support for visually lossless Display Stream Compression (DSC) with Forward Error Correction (FEC), HDR metadata transport, and other advanced features.

Tweet
Tags: DisplayPort VESA
<Apple: Spotify doesn't pay 30% "app tax", barely pays at all >YouTube Music will download 500 of your favorite songs
Previous Next
Comments have been disabled for this article.