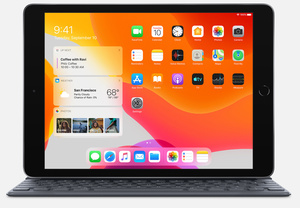 Apple's iPhone event on Tuesday was mostly consumed by the new iPhone models, name cheaper iPhone 11 and the new flasghip iPhone 11 Pro (and 11 Pro Max).
Even the new services got plenty of limelight, but there were other product releases too. One of them was the all-new seventh generation iPad.

I say all new, but in fact the iPad unveiled this week included some fairly dated hardware. While Apple calls it the first seventh generation iPad, it has a system-on-chip from 2016.

The new iPad comes requipped with a A10 Fusion chip, which means that it has the same processors as a iPhone 7. Not that A10 is a lousy chip, and you probably don't need anything better for your daily browsing and Instagramming &ndahs or whatever the kids do these days.

Also, fortunately the slightly obsolete equipment means that you won't have to break into your nephew's piggy bank to afford it. A $329 starting price tag seems like a good deal for an iPad.

It comes with a new, larger 10.2 inch Retina display, and supports first-generation Apple Pencil as well as the full-sized Smart Keyboard. The charging port is still the Lightning type, though.

It will be available on September 30th in Silver, Space Gray, and Gold. Prices start at $329 for the WiFi model and $459 for the WiFi+Cellular model. You can choose between 32GB and 128GB storage options.