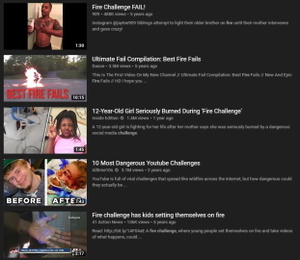 A mother is warning about the dangers of social media 'challenges' after her 12 year old son is badly burned doing the so called 'Fire Challenge'.
Viral challenges are far from new. For years, people have essentially performed silly or stupid stunts on video and posted it online. We all remember the ALS challenge phenomenon that prompted millions of people to dump cold water over their heads and then challenge others to do the same.

Well, how about you set yourself on fire? Incredibly, a small number of people seem to have done this. It was reported this week that a 12 year old Michigan boy had suffered second degree burns after his friend set him on fire. Amazingly, the goal was to post the video of this "challenge" online.

The boy spent four days in hospital after his friend sprayed him with nail polish remover and then lit him up. His mother, Tabitha, has warned about the dangers of social media challenges.

"I just want everybody to know that these challenges, or whatever they're watching on YouTube, is not worth risking your life," she said, reports NBC News.

"My son got burned second-degree -- and it could have been way worse."

Thankfully, this doesn't appear to be a common occurrence but it's not the first time it has happened. A 12 year old girl in Detroit, Michigan, spent two months in hospital in 2018 due to burns sustained from the same stunt. In 2016, a boy from Queens, New York, was also badly burned while performing the challenge after he spread rubbing alcohol on himself and ignited it.

The sub-levels of stupid seem to have no bottom...

Originally posted by dyurko: The sub-levels of stupid seem to have no bottom...

Oh I am sure they will find a way to become more stupid. We've only scratched the surface, of the depths the tide pod eaters will go to prove they are morons.

Another failed attempt at a Darwin Award.

The Problem With The Genepool Is That There Are No Lifeguards! ;-)
Comments have been disabled for this article.