Installing AviSynth is a simple matter of running the installer and considering a few options. After agreeing to the (GNU Public) license you'll be given some options to install different components. Besides documentation language options, you'll see Select Association and Select Extra Files. Associations add options for Windows to automatically open an AviSynth (AVS) file with certain programs automatically, including the ability to open and create AVS files from the Windows Explorer context (right-click) menu. The Extra Files listed are primarily of use for developing plugins. If you're not planning to do any development around AviSynth you shouldn't need them. 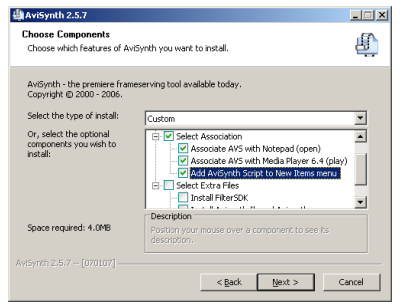 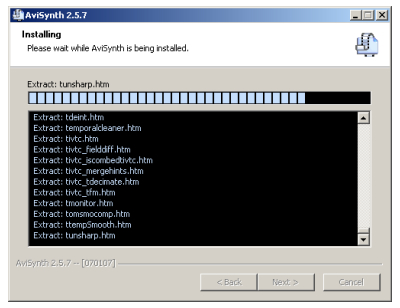 Many people have written plugins that extend the functionality of AviSynth. Before you can use a plugin you need to download it to your computer and copy 1 or more files to the AviSynth plugins directory. If you installed AviSynth to the default location, that will be C:\Program Files\AviSynth 2.5\plugins. In the AviSynth program group on the Start menu there's a Download Plugins link that will open a web page with links to many of them, including the ones used in this guide. Each download is a zip archive which normally includes a DLL file and either text or html files with instructions. Some plugins also come with source code or example scripts. The DLL files need to be copied to the AviSynth plugins directory so AviSynth can autoload them.
Note: The download page has 2 columns for download links. The column to the left is for AviSynth 2.0 plugins and the one on the right is for AviSynth 2.5. Make sure you get the v2.5 plugins.

Arguably the first application commonly used to open AVS files was VirtualDub. It can be used to encode video frameserved by AviSynth using VfW codecs such as DivX and XviD. With disc space being a fairly cheap resource, it can also be used to encode to lossless formats to create actual AVI files to read with another program. This is particularly useful for lossy encoding of scripts that are CPU intensive, as video encoding is commonly done in two passes, requiring each command in the script to be executed during each pass. By creating an intermediary lossless (real) AVI file that contains all the editing and filtering done in your script, it can be encoded more quickly.

AviSynth is also capable of using VirtualDub filters to process video. Although it doesn't provide a GUI like VirtualDub, this is useful for adding those filters between native AviSynth filters. Since many of these filters are also available natively in AviSynth, some directly ported from VirtualDub, it's best to look for a native alternative first. Since VirtualDub was originally designed to work in RGB (vs. YV12 for AviSynth) a colorspace conversion both before and after the filter will likely be necessary. This will result in some quality loss.

Even if you're not going to use VirtualDub for encoding, it makes an excellent tool for previewing and fine tuning AVS scripts. There are some operations that require you to visually inspect either individual frames or frame sequences. VirtualDub allows you to either play or single step through the video. In addition, it's sometimes useful to see text output from certain filters (displayed over the video) or use the graphic interface for a VirtualDub filter to determine settings for a comparable AviSynth filter. Levels is a notable example. Since VirtualDub is both free and small (requires almost no disc space for multiple copies) it's reasonable to keep separate copies for any program that needs one. It's a good idea to create a VirtualDub folder in the AviSynth folder to store a copy of VirtualDub. If you're going to be using a script editor with AviSynth it may also be able to use VirtualDub for previews. If it does you can put another copy in an appropriate location for it to use.

Depending on the program you need to load AVS files in you may need to use another application to apply a wrapper, which is basically code that changes what other programs see when opening the script. Some newer programs don't use the built in windows (VfW) routines for opening AVI files, which means they don't necessarily recognize AVS files as being comparable. A common solution is to use an application called ffdshow that includes both a DirectShow reader for AVS files and a utility called MakeAVIS that creates AVI files to load in programs that support that type as input but don't accept AVS files.