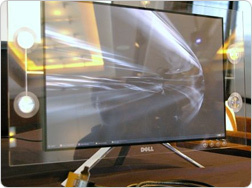 Today, during its "Hybrid Business" strategy launch, computer giant Dell spent a few minutes discussing its new DisplayPort standard. According to Dell CTO Kevin Kettler, the new "interconnect will redefine what an LCD monitor looks like".
He mentioned it will support 4x the current HDTV resolutions, allow for integrated peripherals around the display and allow the user to "daisychain" mulitple monitors instead of installing them in a star configuration. According to Kettler, the audio, microphone, panel I/O and more will all go through a single bi-directional cable.

The main point was that the new LCD monitors would be super-thin due to the elimination of the electronics used for video conversion. The prototype, displayed to the right, is only half and inch thick and very sleek looking.

More updates as they become available.

would that be the new hd connection that has just recieved approval from VESA as the new industry standard by any chance?

Originally posted by link above:DisplayPort takes the lead over UDI and HDMI for computer displays

Consumers have made one thing clear about the tech industry over the past several years: format wars are confusing and often times deliver more issues than solutions. Display technologies consisting of DisplayPort, HDMI and UDI have all been ferociously vying for industry support over the past two years. Despite a strong push from all three standards, DisplayPort crossed a major milestone in April when it received approval by VESA to be an industry standard.

BTW, does anyone know who won the dvd-, dvd+ format war?

"In a world of universal deceipt, telling the truth ia a revolutionary act." George Orwell 1984

This screen looks like one of the white screens teachers bring down to project overhead projectors. This would be good for presentations in big organizations i am not sure about the average consumer yet.

Looks awesome, I would buy it if it doesn't cost* a months salary.

Will it be like HDMI, where every component has to comply with the standard to get it to work? I'm sure it will. And more importantly, will it mean that it can be used for a new form of DRM?

Did anyone notice that Dell is being investigated by NY Attorney General for fraud?

I've read many bad things about their LCD TV's, I can only hope that they have learned a thing or two and implemented them into this new technology.