HD VMD is coming to the US 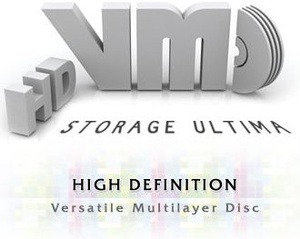 New Medium Enterprises has announced it will be launching its HD VMD Multilayer Player in India this week in hopes that the the format will become a competitor to Blu-ray Disc and HD DVD.
The company also began selling its HD VMD Bundle box which features the player and five movie titles on HD VMD. The titles were not specified but the bundle sells for the equivalent of $293 USD.

For those who aren't sure, HD VMD is a red-laser high-def technology that uses manufacturing techniques similar to that of standard DVDs which keeps production costs relatively low as compared to Blu-ray and HD DVD.

Besides India, the company plans to selling their players and discs in the US through retailer PCRush later this year.

I don't know about that, but I think it's a little late. If it could have came in at the beginning of the format war it sounds like it would have had a good chance because of the price. But right now I don't want to hear about another format, two is enough for me.

Well, it has the technical specifications of..

IT DOESN'T MATTER WHAT THE NEW FORMAT IS! NOBODY GIVES A RATS ASS! GTFO!

HAHA $300 US for a product in India? Yeah... that will sell as fast as the Arch Deluxe!

IMO the movie support for this one is irrelevant.

It might have scored as a player for downloaded stuff tho.

If this format had come along as a replacement for SD DVD doing everything SD DVD can but also was able to play (with a red laser) all the high def codecs burned to DVD5/DVD9 (including especially those in the .mkv container) at a realistic price (for it and the PC burners) then it might have been worth looking at as a replacement for your SD DVD player.

Looks to me like they want too much money for it.

It needed to be much cheaper than HD DVD and it isn't.

just burn your stuff on normal dvd. 8000000Mbps is overkill.

Although initial details are sketchy, it appears that the format uses 5 GB per layer, similar to standard DVDs. The larger formats come from adding more layers. Whereas DVDs hold up to 2 layers per side, standard VMDs can use 4 layers, for 20 GB of storage. There are also reports of 8- and 10-layered versions which can hold 40 and 50 GB, respectively.

The Blu-ray Disc and HD DVD formats use blue-violet lasers, rather than VMD's red laser, which means they can store more information per layer. However, those formats have so far announced only 1- and 2-layered versions with experimental 4-layer versions some way ahead. Therefore, a standard 4-layer VMD stores 20 GB which is comparable to a 1-layered HD DVD (15 GB) and 1-layer Blu-ray Disc (25 GB).

The HD VMD format is capable of HD resolutions up to 1080p which is comparable with Blu-ray and HD DVD. Video is encoded in MPEG-2 and VC-1 formats at a maximum bitrate of 40 Megabits per second. This falls between the maximum bitrates of HD-DVD (36 Mbit/s) and Blu-ray (48 Mbit/s). There is the possibility that VMD discs may be encoded with the H.264 format in the future.[1]

The HD VMD format supports up to 7.1-channel Dolby Digital, Dolby Digital Plus, and DTS audio output, though it will not offer Dolby TrueHD or DTS Master Audio surround-sound codecs.


I don't know, I don't have either a Bluray or an HDDVD player, this one looks like it costs very little so I might be interested if the offer some good titles.
928.10.2007 23:49
theridges
Inactive


I don't know, I don't have either a Bluray or an HDDVD player, this one looks like it costs very little so I might be interested if the offer some good titles.

i like blueray
coz i has more space and ultimate audio

hdvmd
looks like illegal crossbreed for bluray and hddvd

I don't know why they would even bother with a 3rd format it just not make any sense to have a third.

The first person to buy HD-VMD will forever be known as "King Moron of The Universe". The letters "K.M.O.T.U" will be tattooed on their forehead and the entire Earth will give them the silent treatment forever.

Well, it has the technical specifications of..

IT DOESN'T MATTER WHAT THE NEW FORMAT IS! NOBODY GIVES A RATS ASS! GTFO!

HAHA $300 US for a product in India? Yeah... that will sell as fast as the Arch Deluxe!

Think about the size of their market and the huge amount of movies they produce in India in a year. Sure they're not what you want to see at home if you're the average American viewer (even though there are a lot of good movies), but they don't care about that. The United States is not the only important market in the world or the center of the universe. THere are other big markets where you can make money. They have great posibilities if you think about low budget buyers in India, Rusia, Pakistan, middle east and China. I assume also no DRM schemes in that media and that would be a nice incentive in China, where they love to copy everything.