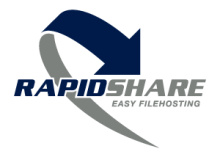 Rapidshare has announced that it will indeed be appealing a recent German court ruling which has the potential to have the gigantic file hosting site shut down.
Last month the court ruled that Rapidshare must block access to any musical works that are represented by the German music rights group GEMA. The ruling even went as far as to say that the courts can "take measures that might have the risk of making Rapidshare's service substantially less attractive or even close it down completely."

A company representative has now said that "Rapidshare wants to clarify the legal situation for hosters", and will be appealing the ruling. The representative also argued that it would be next to impossible to filter its uploads because users can rename files, split them in pieces, or save them as different formats before uploading. Continuing on, the spokesperson added that not all uploads can be considered illegal or unauthorized as music fans can be using the host to have backups of their own MP3 collection without sharing the links.

GEMA, from the other side of the spectrum, has said that it is in settlement negotiations with Rapidshare but refused to comment on any of the particulars.

being an active memeber of the 'scene' community i can personally tell you that rapidshare does monitor alot of its 'illegimate' files on their servers... many file links have come up to a deletd file page... i've use rapidshare to host many legitamate files... pictures, song demos from our band, files i've linked to from this very site... i don't see how they can put an anoymonous hosting site responsible for the actions of their clients... hopefully nothing bad comes out of this...

I just hope they got some good lawyers, I like when the little guy stands up to the huge rights-denying corporations. If worst comes to worst, they can always move their servers to an island in the Caribbean, I hear the weather is nice there.

The idea of charging people $ to download somebody else's copyrighted material is what gets me. Cacked warez is common there. Either you pay those bribes, or wait for days to download something in multiple volumes...

When you are driving down the road, how do you know that the guy driving in front of or next to you is not a jewel thief. Do people suggest closing down all roads because of criminals? Yes, RS is used for illegal distribution. But it's also used for many legitimate purposes. If RS can take down the obvious files (like those with the name "NAME OF MOVIE DVDSCR") then that should be enough in terms of what they are responsible for.

Its all about money!!! There is no sense to shut down the site or in fact punish it. It will all resolve to the speaking abilities of the lawyers and the bosses and how much money they are willing to spend.

The RIAA should be spending more time on creating an ad supported service such as Qtrax where the artists would get paid per Download via the ads injected in the Qtrax player/Downloader. Same could go for rapidshare. This nonsense has gone on for over 6 years now and nothing has been accomplished already. Well almost nothing. I sure got a good laugh at the RIAA training video I've downloaded via Bittorrent where they were saying that people who Download pirated music also do drugs. Well i suppose that there are 60 million drug addicts here in the US. Wow I must get into the racket of Downloading free music on Limewire. Could make me a huge sum of money.

I think these mentally challenged bastards need to go back to their special ed classes and learn how to button their clothes for themselves because I am sure with a mentality such as the RIAA's I am sure that they do nothing good for society. I can't actually believe that a judge can even listen to this moronic dribble with a straight face. I just could not stop myself from laughing as I watched a bunch of technically challenged people talking about piracy.

I wish rapidshare the best of luck this could b a long battle.

So according to the Judge..
If criminals break into my house and steal my belongings i can go ahead and sue the roads department for providing the road for the criminals to get to my house ??