Microsoft has finally officially confirmed new updated Zune media players which will include higher storage capacities as well as the ability to buy music directly from the FM radio built into each device.
Beginning on September 16th, all Zune media players will also allow "consumers to wirelessly download or stream millions of songs on the go from thousands of wireless hot spots around the country," says Microsoft. The new ability will come via a free firmware upgrade for current users and will come already installed on the new Zunes.

The flash-based Zunes will come in a 16GB variety now and the HDD-based Zune will have 120GB capacity now. There will also be two new colorways, blue-on-silver and all black.

“Digital music services really come alive when they help people find not only the music they know they like, but the music they didn’t know they would love,” said Chris Stephenson, general manager of Global Marketing for Zune at Microsoft. “With the combination of subscription, wireless access to millions of tracks, and powerful discovery features like personal recommendations and the ability to buy music from FM radio, Zune is taking the digital music experience to the next level.”

“Microsoft’s decision to integrate an FM tuner into the Zune was revolutionary and they continue their extraordinary leadership with Buy from FM,” added John Hogan, president and CEO of Clear Channel Radio. “We’ve always known that radio is the primary source for discovering new music, and Microsoft’s decision to marry music discovery and delivery does two things: enables consumers to instantly satisfy their passion and enables FM song tagging to be enjoyed by all radio listeners, everywhere.”

As of September 16th the prices for the Zune line will be as follows: 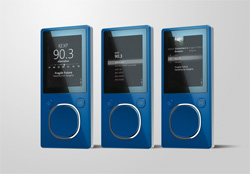 This is in respond to the new iPods?

Originally posted by OmriSama: This is in respond to the new iPods?

The difference between the 16gb model and the 80gb model concerning price is not very logical. $30 more for 5x as much storage?

I absolutely LOVE my 30gb ZUNE and have never regretted not becoming an iPodite. I do use the FM station as often as I do the player and even though I have plenty of storage left, MAY consider the 120gb in the future. To infinity and beyond!!!

Originally posted by 21Q: The difference between the 16gb model and the 80gb model concerning price is not very logical. $30 more for 5x as much storage?

The price discrepancy is due to the fact that the 16GB is purely flash-based but the 80GB has a hard drive.

When the 16GB drops $50 I will probably pick one up to run with as my running habits seem to be killing my iPod's HDD.
610.9.2008 18:02
EnigmaCM
Send private message to this user
Junior Member

I wonder when or even if it's possible for a downloadable update for 80 gig Zunes for an equalizer. I got one of these and that is the only one gripe I have against the Zune 80 gig. So what if I can sync wirelessly throuhg to my pc, I wuld rather have an EQ over wireless even if it runs down the battery a little.

if this fails anything like it's predicessors, don't be suprised. On the other hand, the firmware upgrades could make this more appealing. The problem with incorporating a pay service for an integrated music dowload function is that it is FAR too easy to get music for free to make this a selling point.

Have a 1st Gen Zune after having an Ipod for quite some time. No complaints with the Zune and liked better then the Ipod. I will never quite understand why anyone would pay for the flash drives (either Zune or Ipod Touch). You pay a lot more for a lot less GB, and IMO you just set yourself up to have to buy another player sooner then later when you run out of space. Save some money, buy the HDD players (either Ipod or Zune) and future proof yourself for GB space, 16GB can get eaten up just way too quick these days, especially when you are paying a premium for...

as much bashing as the zune gets and will get here. I love mine and think these new updates are great

Originally posted by EnigmaCM: I wonder when or even if it's possible for a downloadable update for 80 gig Zunes for an equalizer. I got one of these and that is the only one gripe I have against the Zune 80 gig. So what if I can sync wirelessly throuhg to my pc, I wuld rather have an EQ over wireless even if it runs down the battery a little.

Your 80gb will never have an EQ. There necessary hardware just isnt there for it. If you want/need a baisc EQ then you'll need to pick up a cheap 30gb somewhere.

I for one am looking forward to these software/firmware updates coming next week. Its only gonna make a great product even better.
1114.9.2008 14:44
OFI
Send private message to this user
Newbie

Any chance in these coming along with a major software update? Unless Microsoft puts some serious work into the software these will sell the same as the previous versions.
I thought iTunes was rubbish until I started using the Zune software. How a software company can get the hardware so right yet the software so wrong (especially after the time that has now passed) is just ridiculous.
It could all be avoided if MS would just drop the silly software altogether and support software it already has in place, Media Player and Media Center. Both of which have the capability of syncing with mp3 players yet the companies own mp3 player is unsupported!

Microsoft should've never gotten rid of the EQ function. My 30gb got stolen and I upgraded to the 80gb. I love the new look but I really miss cutomizing my audio.