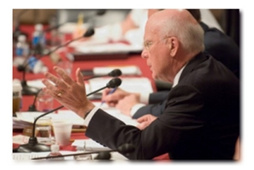 A bill which would require terrestrial radio broadcasters to pay additional royalties to performers for the music they play. Currently US broadcasters are only required to pay the songwriter.
Both satellite and internet radio services already pay performance royalties.

In addition to music industry groups, the bill is getting support from Pandora Internet Radio. The new royalty would be equivalent to Pandora's payments to SoundExchange, which were recently agreed to after almost two and a half years of negotiations..

Before last week's committee vote Pandora sent out emails with a message from founder Tim Westergren. They askied Pandora users to call their Senators and encourage them to support the bill.

I hope this email finds you enjoying the arrival of fall with a great Pandora soundtrack.

I'm writing today to ask for your help on some issues that affect internet radio and the artists whose music we play.

The radio royalty system as it stands today is fundamentally unfair both to Internet radio services like Pandora, which pay far higher royalties than other forms of radio and to performing musicians, who receive no compensation when their music is played on AM/FM radio. There is a very important vote in the Senate this coming Thursday, October 15th, on a piece of legislation that represents a potentially major step forward in correcting both of these issues - establishing both a more level playing field across all radio and ensuring that artists are fairly compensated.

We, along with the artists whose music we play, strongly support this new legislation called the Performance Rights Act (S. 379) and hope that you'll lend your voice to this effort.


The emails go on to ask that the recipient contact a Senator on the Judiciary Committee to let them know you're in favor of the bill.

Besides levelling the playing field so that terrestrial broadcasts have similar royalties attached as internet streaming. this would also put the much larger traditional radio operators in the middle of the royalty debate.

Rather than stand with internet-only operations opposing the performance royalty rate set by the Copyright Royalty Board in 2007, terrestrial broadcasters worked out a better deal which only covers simulcasting of their over the air programming.

Pandora may also be hoping to set up a showdown between the National Association of Broadcasters (NAB) and the labels. Pandora's agreement with SoundExchange for lower rates required a concession on their part.

The SoundExchange offer they, and many other webcasters, agreed to signs away their right to appeal for lower royalties or even help others mount such an argument.

Article 6
Non-Participation In Further Proceedings
CPB and any Covered Entity making Web Site Transmissions
in reliance on this Agreement shall not directly or indirectly
participate as a party..., or in any manner give evidence or
otherwise support or assist, in any further proceedings to
determine royalty rates and terms for digital audio transmission
or the reproduction of Ephemeral Phonorecords under Section 112
or 114 of the Copyright Act for all or any part of the Term,
including any appeal of the Final Determination of the Copyright
Royalty Judges.

A companion bill in the House of Representatives was passed by their Judiciary Committee in May. The head of the Copyright Office argued in favor of that bill purely on the basis that the record labels need the money.

She didn't offer a rationale for making copyright law purely to prop up a failing business model.

Not every Senator on the Judiciary Committee was in favor of the legislation Senator Arlen Spector suggested it would be preferable for the labels and broadcasters to work out a deal of their own rather than legislating a solution.

He also expressed an interest in getting better information about how much it would end up costing broadcasters. The bills opponents maintain it will cost broadcasters $1 billion in the first year.

Senator John Cornyn said "I will oppose this bill because I believe it hurts innovation. It imposes new costs on radio stations of mid-size and small size."

He added that he believes it will ultimately be bad for the average person, saying "I believe this bill will shrink rather than grow the typical American's access to both music and radio, and the diversity of the music and radio options available."

In the US radio has traditionally been exempt from paying performance royalties based on the assumption that the exposure they offer recording artists and labels is payment enough.

Internet and satellite radio both pay performance royalties as mandated by the DMCA.

The labels are claiming the benefits of radio exposure aren't as great as they once were and that radio stations are getting a free ride by making money from their recordings.

Of course all this supposed harm hasn't stopped them from sending promotional CDs to radio stations or paying to get their music played.
Tweet
Tags: Pandora Royalties Pandora Radio
<Verizon starts "Quadruple-play" bundles >U.S. gaming industry returns to growth in September
Previous Next

its time to hit them where it hurts and stop playing their music there are plenty of acts that would be grateful of the exposure gained from regular radio broadcasts, if you are one of these acts then i suggest u contact your local station now so we can bring down these greedy bas***ds

the labels/performers will insist on shooting themselves in the foot, what will happen is stations will change format to talk or oldies and new music will not be heard

In the film "The Demolition Man" all that was heard on the radio was old ad. jingles, me thinks that could come true

uummm...radio is meant to advertise for music 0-o
By forcing them to pay you reduce advertisement and sales 0-o

Originally posted by beanos66: the labels/performers will insist on shooting themselves in the foot, what will happen is stations will change format to talk or oldies and new music will not be heard

In the film "The Demolition Man" all that was heard on the radio was old ad. jingles, me thinks that could come true

This is great news! 99.9% of the music on the radio is terrible...if it costs twice as much to play, then we will only have to hear half as much of it. Not to mention the advertising thing...imagine if people chose the music that they liked rather than letting the corporate-owned radio stations pick it for them! Tallented performers might actualy be able to make it from time to time.

KillerBug, you might be right but I think this spells the end of music radio. I listen to the radio less than half the time I am in the car. I think that will drop off. I assure you I will stop buing CDs in protest. I started buying CDs again feeling guilty about my fantastic music library. Then all that music is already banned from the radio in the US. That is why I was buying. The greedy industry sees CDs all the money lost because the CDs have to be imported and they do not get a cut.