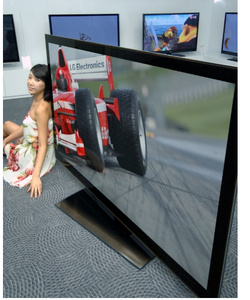 LG has unveiled the world's largest LED-backlit 3D HDTV this week.
The 72-inch Infinia 72LEX9 is available in Korea, and is now the largest commercially available 3D HDTV using LED.

It is unclear if 3D HDTV will come bundled with the necessary stereoscopic 3D glasses.

They will be ready when Star Wars comes out...

Maybe if these catch on regular HD TVs will come down enough that I can get one.

Regular HD TVs are already dirt cheap...but maybe you can scope out the dumpsters.