Global iPlayer will be subscription-based, iPad-only 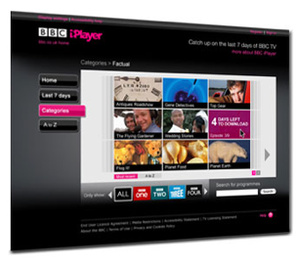 The BBC has said this week that their global iPlayer will be iPad-only, as well as subscription-based.
Since its release in the UK last year, the video-on-demand streaming service has been the most popular in the nation, giving license-fee payers a chance to watch shows like Doctor Who and Top Gear when they miss it on TV.

"There’s a general acknowledgement in the world of VoD that there needs to be a hybrid business model – a combination of subscriptions, download to own and pay per view.

I can see the value of that view and I believe it’s the way that the global iPlayer will go in the medium term.

However I can announce here that we’re going to be adopting a pure paid subscription model for the global iPlayer for launch – in part to get audiences used to using the service, but more importantly so we can generate additional value from the service in terms of the user data that it gives us."

The company says having shows on iTunes brought in £10 million in revenue in 2009 so the iPad-only subscription model makes sense for the media giant.

Screw you BBC...getting in bed with apple while blocking others from being able to access your services, even by internet browser. You block me because I am a US citizen, you block me because I have a droid, and I no longer want you...because who could trust news from such a corrupt organization?

If I pay the BBC Licence fee I should then be entitled to view it's content. If Licence fee payers payed the development cost then it belongs to us. Also, why just have it on the very expensive iPad? But killerBug is wrong about the BBC news coverage as it is fairly good and unbiased, however, US coverage is for the four to six year old market and has no understanding of world affairs.

I'm also very disappointed with this move, and hoping BBC chokes with the "apple"... :/

"You know, it seems that quotes on the internet are becoming less and less reliable." -Abraham Lincoln.
45.12.2010 16:46
qintoobli
Send private message to this user
Junior Member

ok, fair enough about the apple thing - but when the uk pay for a tv license, we pay to watch tv broadcasts and indirectly iplayer (you only need a licence to watch programs while there being broadcast)

why should other countries ("US citizen"'s) get to watch iplayer for free? - good on bbc for charging!
and yes - bbc news is "fairly good"!!!

BBC news is little more than state propaganda.. I live here, I take part in things which get covered by the news.. and they are biased.. very very biased.. "riots in London and Manchester" .. bull .. I was there.. maybe 20 people got angry after being illegally prevented from leaving an area.. luckily for the state stormrtroopers.. they wouldn't have managed to control 10,000 of us of we had all been intent on violence... but what does the news cover.. oh yes.. a few people painting on walls (oooo.. such a huge crime!) and a van which was left deliberately to PROVOKE an attack being attacked...

People should remember that the BBC is not under any obligation to provide any VOD service so they shouldn't moan if you cant access it on their preferred device. If the subscription based model works then I'm sure they'll extend it to other devices because they want to make more money. I have to admit though that selecting the iPad rather than a PC/Mac based application is a blatant marketing ploy by Apple that the BBC is obviously getting something for.

@ KillerBug
I'm sure you're experienced enough to know that you're going to struggle to get any VOD on a Droid because of the lack of secure DRM on Android. Were you expecting anything different from this service? BTW why they feel the need to have DRM on a crappy low-def mobile stream I don't know.

@ Frogfart
You pay for a TV licence which allows you to receive "broadcast" television. Most of that fee goes to the BBC but there is nothing in the contract that says you must be able to access the service on the internet at all, let alone worldwide. The BBC cannot gain any revenue from advertising so they are quite within there rights to charge for access from other countries who don't pay for the service.