Amazon has "sold millions" of Kindles this holiday season 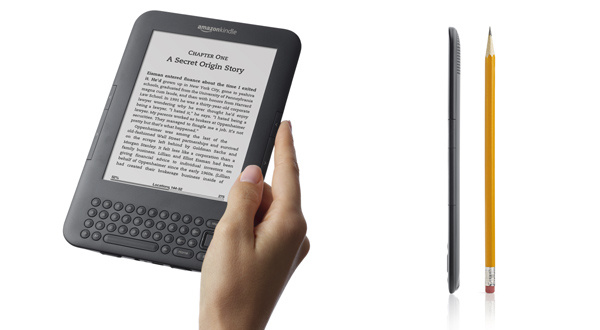 Although normally dead quiet on Kindle sales figures, Amazon has boasted today that they have "sold millions" of the latest generation e-readers during the first 73 days of this quarter, strong numbers considering the Christmas rush is still heating up.
In the past, Amazon had said little about sales figures, only claiming that the Kindle was the top selling item on the e-tailer's site, and its "fastest selling" item, ever.

The giant online retailer has always said that the hardware sales are not as important as the e-book sales, and Amazon even makes Kindle apps for iOS, BlackBerry, Android, Macs and PCs.

Despite being the clear market leader, increased competition from Apple, Barnes & Noble and now Google has analysts believing a once 70-percent share will fall to under 40 within 2 years.

$140 is still a bit too much for this. If I understand it only reads books I buy from them right? If that's correct they should pretty much give the thing away...

Originally posted by dEwMe: $140 is still a bit too much for this. If I understand it only reads books I buy from them right? If that's correct they should pretty much give the thing away...

No it will read any PDF format document and can also upload any personal document, email, etc and they will convert it to the kindle format. There are also 3rd party converters that convert to PDF so I don't see this as a big issue. In my opinion, the only other e-reader that is comparable is the Nook. But with the Nook you have to buy from Barnes and Nobles. Amazon has a much bigger selection. I wouldn't buy the 3G version of the kindle I would simply buy the wireless version for %139.00. It is cheaper and you don't have to have a 3G account to use it.
316.12.2010 12:46
Gnawnivek
Send private message to this user
Member

It reads MOBI too... The dictionary works on MOBIs, but it doesn't work for PDFs (the cursor will not move on PDFs). With a little tweaking, you can read Chinese/Korean/Japanese/Russian/Hebrew books. It's an awesome gadget, I love it, I'm learning new words everyday :) The new models are even better, I wish retailers have trade-in programs (like car dealers). The newer models are smaller, lighter, brighter, cheaper and battery lasts longer.

You are more or less locked in to Amazon for the books that you purchase, but there are a lot of free books out there. I use Calibre to convert e-books to mobi format which displays a lot better than the native PDF viewing on the Kindle. Calibre will convert just about anything without DRM.

Originally posted by Virgil_B: I wouldn't buy the 3G version of the kindle I would simply buy the wireless version for %139.00. It is cheaper and you don't have to have a 3G account to use it.

You don't have to have a 3G account. It's free. The 3G Kindle has a modem and sim card inside with automatic connection to different 3G carriers around the world. It it's in reach of wifi it will connect to that, otherwise it goes to 3G.

I've got the 3G model and the extra fifty bucks is soon forgotten when I'm out of range of wifi.

Originally posted by Xian: You are more or less locked in to Amazon for the books that you purchase, but there are a lot of free books out there. I use Calibre to convert e-books to mobi format which displays a lot better than the native PDF viewing on the Kindle. Calibre will convert just about anything without DRM.

You can purchase books from almost anywhere and either sideload or email them to the Kindle.

Calibre will also convert DRM books if you can find the right plugin.

It seems that a lot of people don't know the Kindle at all, besides that it's an e-reader, lol.

The 3G network is FREE! If you buy a Kindle that has the 3G feature, there's no monthly fee for the service. That's right, you can surf the internet and check e-mails (under experimental tab) for FREE.

You can read books from external sources, you're not locked to Amazon's library! Just plug the Kindle into a computer and drag/drop the files (PDF/MOBI or native Kindle formats) into the DOCUMENT folder. You can do this to Audio books as well (drop them to the MUSIC or AUDIO folder, I forget the name of the folder).

You can also read comic/manga, there are apps that convert the pictures for Kindles. Those files go under PICTURE folder. Of course, you can create your very own picture books with ease :)

I have the Kindle for almost two years now, total spent on Amazon book is $3.95... The Complete Sherlock Holmes and that was it :)

There are so many free books on Amazon (not the crappy ones). When a new author or a new book in the series comes out, sometimes it's free. In the case of popular series, the older books in the series are free. They're all legitimate books (not tampering with DRM etc.)

Best of all, all of the books you purchase (even the free ones) are manageable under your Amazon digital account. You can share the books to your other devices or multiple Kindles. Contrary to what people said about cannot sell your digital books. You can make money (if you're that cheap that is) if you "lease" your Kindle to friends (multiple Kindles, you can make money that way, but only up to FIVE Kindles can be attached to your account). If you're bored with your collection, you can sell your account. If you have book worm friends, you can piggy back in their account to read their books to your contend. There are so many ways to enjoy the Kindle :)

Oh yeah, any notes you took on books, you can share them with other Kindle users (great for exams). The next firmware release will enable book sharing among Kindle users. But like the text to speech feature, only if the publisher allows such feature (this is how the Nook works, don't think you can share any books, it's just a sale pitch).


Now, say you don't care for any of that.. You can put external files on your Kindle, the newer models have more space, more books! Let the files be camera/tv/computer programming instruction books/manuals... You can carry them pretty much wherever you go. PDFs, MOBIs... TXTs, DOCs? No problem, just use Calibre.

Maybe I said too much, shhh... Happy holidays!


Peace!
Comments have been disabled for this article.