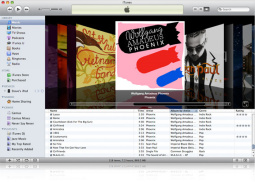 As of November 21st, digital music downloads have only seen 5 percent year-over-year growth, a number much lighter than most record labels execs had expected and hoped for.
The industry, while at least seeing continued growth from digital revenue has continued to see strong declines in CD sales, with 47 million fewer physical CDs being sold in 2010 YoY compared to 2009.

So far, digital track gains have increased by 95 million this year.

Better treatment from record industry toward musicians + less greed on their end == better and more sales.

I think many musicians are starting to steer away from large labels releasing there own music on the web, simply because out of the $10 CD sales the musician might see $0.50 or from the $1.29 only purchase, a few cents...

Good...their profits are falling. Hopefully they will be losses soon. I won't buy anything from the media cartels...this means that there are some artist I won't buy, in spite of liking the music. These musicians knew what they were doing and who they were dealing with when they signed contracts...I don't feel guilty about not contributing to their success, and I wouldn't even feel guilty about pirating their music if it was the only way to get it without supporting a cartel (usually there are other routes; like sending a check to one of the musicians...you get your CD, they get more profit, and you might even get a famous signature out of the deal).

hmmm why are cd sales falling ? oh i know thats because nobody buys cd players anymore ,look at the amount of teenagers and early twentysomething year olds, they are normally the biggest spenders when it comes to music and they only buy the tracks they like, unlike when we were young and had to buy the whole album which used to consist of a couple of tracks you liked and a lot of filler

they problem is the music companies expect more and more people to go and buy any sort of music and the reality is simply there's only X amount of people in the world that are buying music, so right now it's simply levelled out.

You can't sell more but only lose sales as people get turned off of buying music.

to be be honest everything is losing out mainly because governments are raising costs so any spare cash laying around just isn't there for this sort of stuff anymore.

IMPORTANT: If you hate Sony for being so corrupt, copy this image into your signature too!
714.12.2010 00:41
Baccusboy
Send private message to this user
Junior Member

Ok, what I don't understand is why the Beatles is selling so well when you can buy the actual CD sets for less than the download versions? Hopefully, the word will get out.

I'm not going to make rich people more rich. If you sell out, you already a cash deal with them, deal with it.

Originally posted by Baccusboy: Ok, what I don't understand is why the Beatles is selling so well when you can buy the actual CD sets for less than the download versions? Hopefully, the word will get out.

Hahaha... Shut up and drink to Kool-Aide :) Remember Ferengi Rules of Acquisition #141.. http://www.csua.berkeley.edu/~dxu/econ/rules.html


All joking aside... Great point.

people dont buy music takes too long and cost to much.most people just go on the internet and download the songs.yes about 1% of people will actually pay to download them.