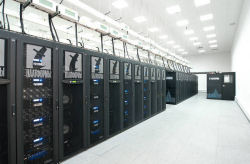 Across Russia, GPUs are being increasingly used for raw high-performance computation needed in research.
Moscow State University is upgrading its Lomonosov system (shown in picture) with NVIDIA Tesla GPU's. The upgrade will push the Lomonosov system into the world's faster supercomputer lists, comprised of 1,544 NVIDIA Tesla X2070 GPUs and an equal number of quad core microprocessors.

The upgraded system will provide up to 1.3 petaflops of peak performance, which will put it among the fastest in the world and easily the fastest in Russia.

"Our research requires enormous computational resources, and we need to deliver this performance as efficiently as possible," said Victor Sadovnichy, academician, Rector of Moscow State University. "The only way for us to achieve these twin goals is with a hybrid GPU/CPU based system."

The University system is used for research that requires staggering amounts of computational power, such as climate change models, ocean modeling, the formation of galaxies and post-genomic medicine.

Also in Russia, the Keldysh Institute of Applied Mathematics, Lobachevsky State University of Nizhni Novgorod (NNSU) and the Scientific and Educational Center of Parallel Computing at Perm State University are exploiting the high performance per watt promise of GPU technology.

The Keldysh Institute of Applied Mathematics uses the computing power of 192 Tesla C2050 GPUs for research in the fields of atomic energy. The NNSU utilizes NVIDIA's proprietary CUDA programming GPGPU solution, and plans to upgrade its system to 500 teraflops by 2012.

"There is a staggering potential for GPU/CPU-based systems hybrid solutions to help us address a great number of scientific challenges such as studying living systems, bio-photonics and computational mathematics," said Victor Gergel, Dean of the computational mathematics and cybernetics department at NNSU, director of Scientific and Research Institute of Applied Mathematics and Cybernetics.

"In cooperation with NVIDIA, NNSU is able to give more of our students and researchers access to computational resources that will significantly increase the pace of their work."
Tweet
Tags: NVIDIA Supercomputer GPGPU
<Google acquires SageTV >BSA urges U.S. Congress to pass Data Breach legislation
Previous Next
Comments have been disabled for this article.