According to a report from content delivery company Pando Networks, South Korea has the fastest Internet speeds in the world with an average download speed of over 17 Megabits per second.
By comparison, German speeds were barely above 5Mbps, which was still better than the US or UK. Those countries had average speeds of 4.93Mbps and 4.79Mbps respectively.

The report is based on data collected on downloads from Pando's content delivery network during the first half of 2011.

Looking at the speed data overlaid on a map, one thing that stands out is how slow Internet speeds are in developed countries with strong content production industries.

On the other end of the spectrum, countries where tech industries dominate the economy, including South Korea and Finland, tend to also have relatively fast Internet service. Japan is something of an outlier, likely reflecting the fact they are representative of both categories. 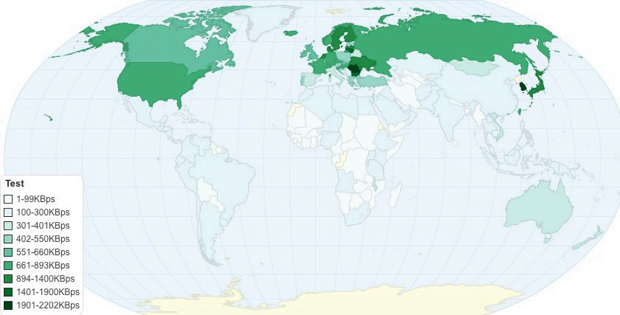 Perhaps more important than the content production itself, there seems to be a correlation between poor Internet infrastructure and content producers pushing for draconian laws to limit new technology in the name of preserving aging business models.

Is it any surprise it's difficult to make money from online content when your core customers have Internet connections which are poorly suited to consuming your product?
Tweet
Tags: Pando Networks Internet speed
<iPhone announcement rumored for October 4 >HP board ready to fire CEO Apotheker
Previous Next

Countries like Sth Korea don't have the geographical problems of getting fast internet to the whole country as places like Australia face. Our land mass is huge but mostly arid while our population is relatively small.

Originally posted by leglessoz: Countries like Sth Korea don't have the geographical problems of getting fast internet to the whole country as places like Australia face. Our land mass is huge but mostly arid while our population is relatively small.

my counter argument to that is that we (Australia) have one of the greatest rates of urbanisation, I assume is your premise is beacause we are spread out it is therefore more expensive to get fast internet to a vast majority of our people.
327.9.2011 09:10
leglessoz
Send private message to this user
Junior Member

Also while we have a lot of very smart people here, Sth Korea has companies like Samsumg that actually make a lot of the equipment necessary for high speed internet. We may be a very urban society but the infrastructure costs are sill massive. When a government tries to do something about it and provide an NBN, idiots like the current opposition try to get in the way. Nothing ever gets done because our pollies are constantly bickering and the rest of the world just laughs. In spite of this we still have better broadband services generally than many other developed countries but hey could be so much better and cheaper. That is one of the things that Sth Korea offers in spades.