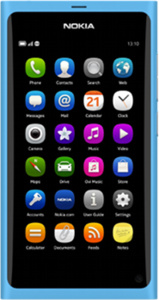 The Nokia N9 MeeGo smartphone announced back in June has begun shipping.
The N9 occupies a somewhat strange position in Nokia's smartphone lineup since it doesn't run either Nokia's legacy smartphone OS, Symbian, or their OS of the future, Windows Phone. In fact it's a relic of plans Nokia has all but abandoned, to get back to the top of the smartphone market with an OS of their own.

MeeGo is a Linux-based OS which resulted from a partnership of Nokia and Intel. It was created through a fusion of Nokia's Maemo with Intel's Moblin.

When Nokia announced their partnership with Microsoft to develop Windows Phones, it appeared to be the death knell for MeeGo.

Unfortunately, with a bunch of money already spent on development, Nokia was left with little choice about releasing the N9.

While it doesn't feature a bleeding edge processor or the biggest screen in the industry, the hardware is quite respectable. It has a 1GHz CPU, 1GB RAM, a 3.9" Gorilla Glass display & 8MPx camera with a Carl Zeiss lense and LED flash.

Despite that, the reality is there probably won't be much of a market for the N9. With one or more new iPhones and Windows Phones from Nokia expected next month, it's hard to see what the appeal of a one off MeeGo phone would be.
Tweet
Tags: MeeGo Product Launch Nokia N9
<Warner looks to expand 28 day release window beyond kiosks and online rental >Official: iPhone 5 to be unveiled on October 4th
Previous Next

WOW the phone and interface looks waaay to much like ios, there are like icons and the time and signal bits up the top and it can make calls.

CAN ANYONE SAY APPLE LAW SUIT COMING YOUR WAY... will be interesting to see if apple do slap them in the face with a suit or do they only do this to people who are a real threat ??

Seriously apples constant "lets sue the world" attitude became old really fast and makes me and others i speak to likens their actions to the old playground antics of the kid who always used to go snitch when you didn't let them play what ever game..