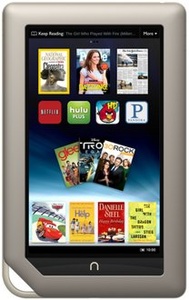 As expected, Barnes & Noble unveiled their new Android-powered tablet today. The Nook Tablet is the successor to their wildly successful Nook Color.
Like its predecessor, it features a 7" display with a resolution of 1024x600. This is the same as Amazon's competing 7" tablet, the Kindle Fire.

Also like the Kindle Fire, the Nook Tablet is powered by a 1GHz dual core processor, but the Barnes & Noble tablet has 1GB of RAM, twice that of the Kindle Fire.

It is also significantly better when it comes to storage. Where the Amazon tablet has just 8GB of internal storage and no expansion slot, the Nook Tablet includes 16GB onboard and accepts SD cards up to 32GB.

Battery life on the Nook Tablet also seems impressive, with Barnes & Noble claiming it will be capable of 11.5 hours of reading or 9 hours of video playback.

Specs aside, the most obvious differences between the two tablets is price. Amazon is selling the Kindle Fire at a loss, for just $199. The Nook Tablet will cost you $249, so the question is whether it is worth the extra $50.

If the RAM and storage differences aren't enough, you might want to consider what services you may want to use with it. Amazon's discounted price is a trade off for being locked into Amazon services.

If you want to use it for streaming video, for example, you will need to get it from Amazon. If you want unlimited streaming, similar to Netflix, you will also need to subscribe to Amazon Prime.

The Nook Tablet, on the other hand, comes with apps for Netflix Watch Instantly and Hulu Plus. The price for getting third party app support like that is not having the tablet subsidized.

Of course, the other part of that equation is whether or not you are okay with rooting your tablet. It would be surprising if both tablets can't be rooted eventually.

If you don't have the extra $50 to spend and don't want a Kindle Fire, you could opt for the Nook Color, which has gotten a price cut from its previous $249 to $199. Although not as powerful as the Nook Tablet, it will also be upgraded with Netflix and Hulu Plus apps.

If a plain eReader is more your style, another option is Barnes & Noble's Nook Simple Touch. The price for their E Ink reader is dropping from $139 to just $99.

It will also be getting a firmware update, increasing battery life to speed up page turning. Increased battery life for the Nook Simple Touch was also announced, but it's not clear yet whether that's firmware related or a change in the hardware for new units.
Tweet
Tags: Android Nook Color Barnes & Noble Amazon Kindle Fire Nook Tablet
<HTC announces which phones will get Android 4.0 update >Best Buy agrees to buy out Carphone Warehouse from mobile venture
Previous Next
Comments have been disabled for this article.