In the latest update to the Building Windows 8 blog, Pat Stemen, who heads the Windows Kernel team, talks about improvements in the next version of Windows designed to lower power consumption.
With its focus on becoming viable for tablets, power consumption is more important for Windows 8 than any previous version of the Microsoft's flagship OS. No matter how good the interface is, a tablet OS that drains batteries too quickly has no value.

Microsoft's focus with Windows 8, says Stemen, is primarily on reducing power consumption when the computer is in an idle state. That is, when it isn't doing anything.

By doing that, he says, you also reduce the power consumption the rest of the time.

In many ways this is actually about the hardware. Modern mobile processors, such as the ARM chips used in most smartphones and tablets, are already optimized to use minimal power as often as possible.

The role of Windows, according to Stemen, is primarily to get out of the way and, "Let the hardware shine." To accomplish this, the Metro Style UI takes a different approach to background processes to allow a computer, such as a tablet, to spend more time idle.

The result is that the computer spends more time in a continuous idle state. This is important, says Stemen, because it takes a certain amount of time before the hardware decides to change states from active to idle. 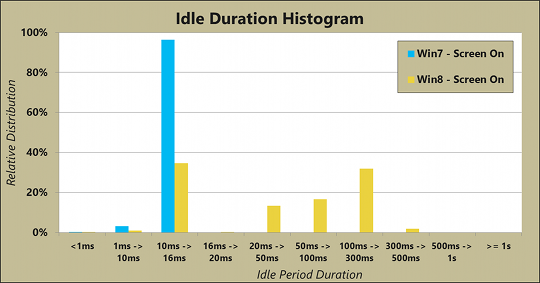 Stemen also stresses the role hardware beyond the processor plays in power management. Windows 8 has a new runtime device power management framework designed to be used by device drivers. Device manufacturers will be able to use special Power Engine Plug-in to ensure Windows takes full advantage of whatever power management features are available.
Tweet
Tags: tablet Windows 8 battery life blog power management
<Google reassures Samsung about the future of Android >Low Income families in US to get $10 Internet and $150 computers next year
Previous Next

I just don't see Windows 8 mainstreaming for regular PC users. The OS looks ideal and to be a great idea for tablets and/or laptops but no way in Hell am I converting to this for my desktop.

Microsoft just keeps getting slower and slower responding to the rest of the industry.
R.I.P.