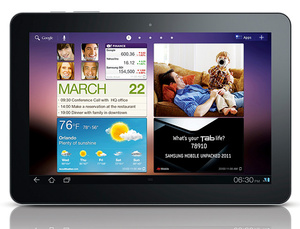 Judge questions fairness of injunction.
On October 13, Federal Court Justice Annabelle Bennett issued an injunction against the sale and marketing of the Galaxy Tab 10.1 tablet in Australia, until both Apple and Samsung resolve a patent dispute at trial. Samsung's lawyer, Neil Young, said that Bennett failed to consider the dire consequences of the ban on Samsung's business.

Now another Judge is questioning the decision. Federal Court Justice Lindsay Foster questioned the fairness of the ruling that led to the injunction being granted at Apple's request. "The result looks terribly fair to Apple and not terribly fair to Samsung," Foster said.

The Australian case is only one of several around the world between Samsung and Apple. The iPhone-maker has accused Samsung of "slavishly" cloning its i-Devices in its Galaxy line of smartphones and tablet PCs.

Throughout the industry there are several high-profile cases between tech firms involving patented technology used with mobile devices. This week, the European Commissioner for Competition, Joaquin Almunia, expressed concerns about how patents are being used to stifle competition in the market.
Tweet
Tags: Samsung Galaxy Tab 10.1 Australia
<Did your Finnish grandmother pirate your scarf? >Apple tops mobile loyalty chart
Previous Next

And let people decide if they want it or not.

What this judge thinks on the case is irrelevant. The decision has been made, and until it's overturned in an appeal process, it will not be undone. But I agree, that neither should be banned, or both be banned scenario; it makes it look like Apple paid off the judge. But that NEVER happens...

The thing is...they have not copied Apple. Apple devices use iOS, Samsung uses Android. It doesn't matter if the devices look exactly the same as they function completely different. It is like saying that someone copied a toaster oven by making a microwave just because they look the same.