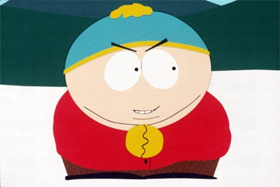 Game Informer's upcoming January magazine will give a first look into the new Obsidian Entertainment-developed "South Park"-based RPG.
The game is called "South Park: The Game," and publisher THQ says the game will hit the Xbox 360, PS3 and PC later next year.

Obsidian is the team behind Fallout: New Vegas and Alpha Protocol.

South Park creators Trey Parker and Matt Stone are "writing the script, performing the dialogue, and overseeing the development of the game," says Shack.

Throughout the course of the game you get to control "the new kid" in South Park and the game requires you to make friends and "defend the town from a wide range of threats."
Tweet
Tags: South Park gaming THQ RPG
<Swiss government says downloading unauthorized music and movies will remain legal in nation >Nokia sees huge drop in Finnish market share
Previous Next

Chance prepares the favored mind. Look up once in a while and you might learn something. - BLUEBOY
23.12.2011 22:49
Mysttic
Send private message to this user
Senior Member

This is wrong on a lot of levels. At least they picked a half decent developer to do it. It just may come out real buggy.

Having a game based on this show is wrong on so many levels? I'm confused. Surely you can't mean that. This isn't after all, the first South Park game ever made. And compared with what else is out there for one to play, I don't anticipate much at all that will be real moraly deplporable. Unless you're a real stuck up type just looking for something to complain about. I hope it isn't real buggy when it comes out. Seems like a real fun time.

I remember playing south park on my Nintendo 64 , that game was so f**ken frustrating.

Quote:Having a game based on this show is wrong on so many levels?

Yes considering there hasn't exactly been an A title cartoon to game since TMNT 2 for arcade (not NES). In order for this work for South Park Universe it's going to have to be executed on a unique take to this universe that hasn't been seen on TV. How as a developer would you do that? What style of RPG do you go for then, in this sense? Definitely nothing like Fallout, so what then? Then again, part of South Park charm is it never followed any tradition rules to anything.

What I would like to see in this game (especially since this being an RPG), is you are a new kid in town with a purpose. What that purpose is, I dunno; maybe goal is to be the most popular, maybe it's to leave town cause you realize it's the shittiest place on earth to live in, who the hell knows?

What I do know is, if they going to put you in the reigns of the South Park gang, then they have to do it in a way that isn't boring or we seen all this shit on TV already. I know many South Park fans would love to play as Cartman, for example, but it has to be done in a style and way that feels like Cartman. For that work you would also need dialect options similar to Mass Effect, because lets face it, half of Cartman's charm isn't so much the things he does so much as the things that come flying out of his mouth.

With that said, same thing could be devised for the other characters. Because making this an RPG will be tricky, what will be the action bits? Will there be fighting, will there be leveling up in tradition sense? This is why it'd be easier to start off as someone new to South Park rather than playing someone that's already been in it.

So yes this is wrong on a lot of levels, because if anything is poorly executed, it will be criticized out the a-hole through fans and critics alike, and nobody wants a half-a$$ed South Park game. Just like nobody wants a South Park game that will utilize any of the tv/movie episodes story arcs. Sure bring in the characters but let it be truly unique in its own right, so that we feel immersed in this world.

And no, I not stuck up looking for something to complain about, I a huge fan of South Park; which is why i hope they treat this game with the respect it deserves
64.12.2011 18:21
5fdpfan
Send private message to this user
Member

Aw, I see. I thought you felt it was a wrong thing to do for other reasons. I hope this game turns out well. IF it doesn't though, I just won't play it and will continue on enjoying the show for what apparently looks to be at least 5 more seasons.