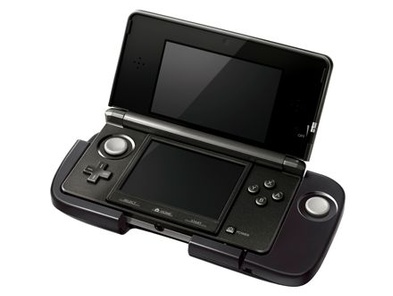 Last week, Nintendo announced that its 3DS Circle Pad Pro would require a AAA battery, much to the dismay of gamers.
This week however, those concerns have mainly been put to bed, as it appears the peripheral will work for 480 hours of gameplay on one single battery, giving most casual gamers a year or so before they need to go out an replace the battery, which can cost as low as $1 for a 2-pack.

The peripheral launches tomorrow along with the release of Monster Hunter 3G in Japan, says 1up.

First rumored in the summer, the company introduced the Circle Pad in September.

A few other games that can use the control system are Resident Evil: Revelations and Metal Gear Solid: Snake Eater 3D.

If they can give a peripheral 480 hours of Battery life....how come they didn't do the same for the actual handheld!

The peripheral only has 1 function. the system has multiple that utilizes a lot of power. The real question that should be asked is how can you tap the 3DS into the peripheral's power to extend the 3DS battery life? Or better yet, can a battery pack be made for the port used by this peripheral?

I still can't get over how blasted silly the thing looks. I appreciate what they're trying to do, and I love having the option for a second stick (My biggest complaint with the PSP was its lacking therein), but, honestly, could it possibly look less ergonomic?

Anyway, the battery life thing isn't that surprising, it's literally powering one circle pad and nothing else; if it lasted any less I'd be surprised.

Also, rechargeable AA/AAAs are the best thing ever.