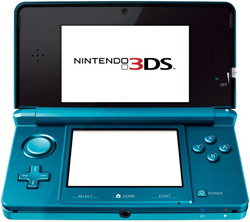 Nintendo will help the French museum appeal to new audiences.
The gaming company has announced today it will be sending 5000 of the new 3DS handhelds to the Louvre for use as an audio guide. Additionally, the museum is developing an iOS app, so their plan is clearly to appeal to the generation that has touchscreen smartphones or still games.

Museum-goers who rent the handheld will get to listen to the guided tour, which is available in seven languages. They will also be able to load and create special itineraries.

Nintendo says they have produced original content for the Louvre, but no one has elaborated on that just yet. Most likely, the content will have minor tie-ins to popular characters or include puzzle/mysteries related to the museum.

Finally, as Crunch mentions, this isn't the first time the two have teamed up, with the museum making an appearance on The Adventures of Super Mario Bros. 3.
Tweet
Tags: Nintendo 3DS Louvre Museum
<Android Netflix app updated to support 4.0 >Final Reminder: Last hours to get 10 cent Android apps
Previous Next Write a comment
Comments have been disabled for this article.