Written by Rich Fiscus @ 19 Dec 2011 6:31 User comments (3)
According to the latest figures from AppData, users of the Android Facebook app now use it more often than those using the iPhone app.
Comparing AppData's figures for the two platforms, the number of monthly users on both are steadly going up, but Android users are increasing more quickly than on the iPhone.

However, the number of Android users for any given day is already slightly higher than the number of iPhone users. This trend, and the ratio of daily to monthly users, are generally considered important indicators of whether an app is gaining in popularity. 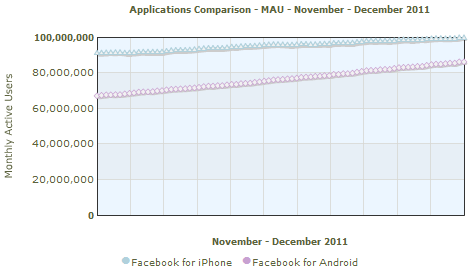 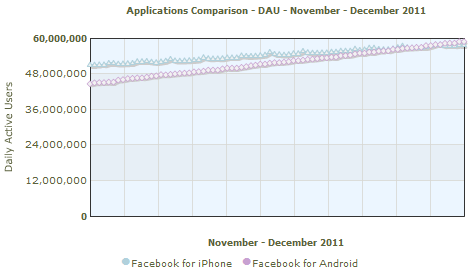 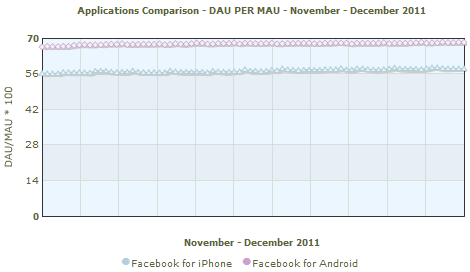 [All figures via AppData]

Besides showing a trend which should be of interest to Facebook, this is important for Android as a whole because it shows the value of developing for the platform. Despite the popularity of Android, many developers still see the iPhone as more important.

In some ways that's inevitable because of the range of options in Android devices. The lack of variation in iOS devices gives developers more certainty about how they will perform on the iPhone.

At the same time, for apps like Facebook, which don't have significant hardware requirements, Android's growing userbase and their increasing use of apps has become an increasingly convincing argument for it being the most important mobile OS for app visibility and revenue.
Tweet
Tags: Android iPhone Traffic AppData
<23 hospitalized after explosion at Apple supplier's factory >BT sues Google over Android Market, Maps, Search, Plus and Offers
Previous Next

As it should. There are more android OS phone out in the world.

That's interesting, because the Android app for Facebook totally blows, and has far less features than the iPhone one. Just proof of another company that is dropping the ball on what will eventually be the dominant phone os sooner rather than later. Go to the android market and read all the comments, for every 1 praise for the app, there are 50 complaints.

Number one complaint? Doesn't do half as much as the iPhone version. There is no reason for that.