Apple to file another suit against Samsung in Australia 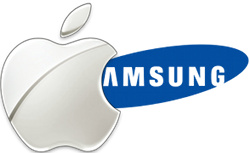 Having lost their bid to ban sales of the Galaxy Tab 10.1 in Australia earlier this month, Apple is preparing to file a new lawsuit against Samsung over their tablet and smartphone case designs.
After a contentious hearing before an Australian judge during which Apple lawyers attempted to delay a hearing in Samsung's lawsuit over 3G patents, Apple's new infringement claims were revealed.

They say Samsung's smartphone and tablet cases infringe on at least 10 Apple patents and registered designs. Apple's earlier suit against Samsung, which will go to trial next year, is over touchscreen patents.

Meanwhile, a hearing on Samsung's claims of 3G patent infringement will take place in March of next year, which is sooner than Apple lawyers wanted. Apple attorney Stephen Burley said the March date would be, "unfair to Apple."
Tweet
Tags: Samsung Apple Lawsuit Australia patent infringement
<Archos announces a 7 inch Honeycomb tablet for $199 >The Samsung Galaxy S line will not be getting Ice Cream Sandwich
Previous Next

I still think there has to be a law against the number of BS lawsuits (or just simply the number of lawsuits, period) you can put on an individual or company. This is obviously a ploy for negative attention & direct need for an ass whooping.

CrApple is obviously scared that they have stepped into a realm of overpriced crap-ware & are in desperate need of repricing their equipment or truthfully going to prison for gouging their fan base. Otherwise, they had better start answering for the price for performance of their iPuds.

Apple just wants monopolies...they can make plenty of money from the mindless sheep that buy anything with an Apple logo...but they want ALL THE MONEY...and to do that, they need to wipe out everyone that has better products for less money. There really should be some sort of law that says submitting information to a court when you know that it is wrong is a crime. There should also be a law saying that you cannot patent something that others are already producing for free just to stop them from giving it away.

Originally posted by KillerBug: Apple just wants monopolies...they can make plenty of money from the mindless sheep that buy anything with an Apple logo...but they want ALL THE MONEY...

Exactly... and everything else you said... Except there is a law against blanket patents for 'everyday movements' (like wiping your ass) that CrApple wants to have control over. I just want to know who is over looking those patent rules Apple is sliding through the system?

Apple just wants to whine that every time a good idea comes out, it should have been theirs; so they sue whomever that happens to be so they can steal it & get theirs out at the same time or before.
http://onlyinrussellsworld.blogspot.com
426.12.2011 22:59
xtago
Send private message to this user
Senior Member

I couldn't see this going ahead simply because the high court judge have blocked apple from suing Samsung in the future completely.

Maybe the Apple lawyers don't understand what not allowed to sue means.

The finial result from the judge was to stop all so I couldn't see suing for something else as being something different or trying to be a different case.

The problem apple have is that a cardboard box could be break their patents as well but they don't seem to be suing the cardboard box maker for some reason.

As Apple aren't suing for the tech but the shape of something.