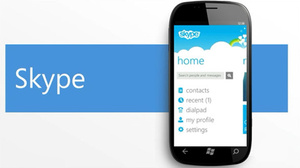 According to Skype's VP of products Rick Osterloh, a Skype app for Windows Phone devices is coming soon.
The exec noted that the company is actively "working on a Windows Phone product that will be coming out soon," after being asked during CES.

Microsoft, which now owns Skype, has kept updates on the video/voice calling service quiet since the acquisition. The company had initially called for a late 2011 release date for the app, but that timeline passed without any mention.

The Verge says, through its own sources, that the initial Skype 1.0 app will not be fully featured. The "deep" Windows Phone integrated app will not come until Microsoft updates the operating system to "Apollo," which is likely Windows Phone 7.6.

Although Osterloh would not go further than to say "soon," the company is likely to show off the app at next months Mobile World Congress event in Spain.
Tweet
Tags: Microsoft Skype Windows Phone
<Facebook on pace for 1 billion users by August >Amazon reveals 2011's best-selling PC games
Previous Next

This is a great move for Microsoft. Since the company purchased Skype last year, it hasnt done a lot to take advantage of the exclusive partnership. This is a great chance for Microsoft to give the Windows Phone a killer feature. Deep integration of Skype seems like something Microsoft would want to implement, given its competing services like FaceTime gaining steam.

Hope its better than the free version. Total Junk!