President of EU Parliament speaks out against ACTA 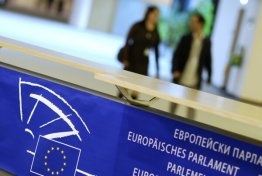 Last Saturday opponents of ACTA, the secretly negotiated intellectual property treaty, held protests across the European Union.
The protests provoked two very different reactions from EU officials. One came from the European Commission, who reaffirmed their support for the treaty via Twitter. EC spokesman Cezary Lewanowicz tweeted, "ACTA does not change EU law, does not prevent people from sharing content online, will not monitor the internet."

What's more notable is that the EC statement appeared to be a reaction to comments made earlier in the day by European Parliament President Martin Shulz during a TV appearance in his home country of Germany. Shulz criticized ACTA for failing to adequately protect the public's rights. He said (translation via EUobserver.com):

The necessary balance between the two - protection of copyright on the one hand and fundamental rights of [Internet] users on the other ? is very poorly enshrined in this treaty inadequately balancing the rights of Internet users against those of copyright holders.

Of course Germany is one of just three EU member countries who have held off on signing ACTA. Based on the turnout for Saturday's protests it's easy to see why. More than 25,000 Germans joined in the protests, including 16,000 in Munich alone.

The protests are, in large part, fueled by misinformation about ACTA provisions, such as claims it includes an Internet surveillance requirement. However, the European Commission has been battling this perception with its own campaign of half truths.

An EC publication released just a day before the protests tries to portray ACTA negotiations as transparent even neither the public nor their representatives in parliament were given input into negotiations. It also points out the EU didn't provide preferential access to lobbyists, without mentioning that had already been provided by the US.

But there is something more fundamental ACTA's official supporters seem to be missing. It is the same thing which seems to have escaped SOPA and PIPA supporters in the US. Even if there wasn't any controversial language, and even if legal experts didn't believe it to be in conflict with EU law, the opposition is as much about the corrupt process which produced ACTA as anything else.
Tweet
Tags: EU anti-piracy ACTA treaty corrupt
<Head's up: Kindle Fire with $50 gift card from Wal-Mart for $199 >Google's hardware plans - Why they just might work
Previous Next

My understanding of ACTA is that it would give similar power to equally powerless people like that of the IRS here in the USA. Number crunchers, pencil pushers & lit/art graduates are now legal to carry a gun use lethal force if they so choose.

The comment may drip with more than enough sarcasm & dramatics, but it is what got Al Capone put away in 1931, but by no means am I justifying ACTA, PIPA, SOPA or any f*ked up variant.

I am saying that when you give guns & power to plebes that have been stepped on & bullied by the very people who were the bullies... and then those bullies tell them to go out & police up others who are characteristically similar... What would you think?