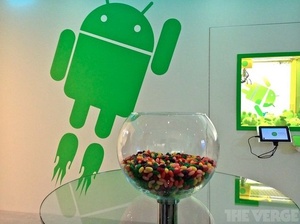 Google has confirmed the name of their upcoming Android update, Jelly Bean.
The name was widely expected, and now the company has confirmed it is Android 5.0.

Says Hiroshi Lockheimer, vice president of mobile engineering at Google: "After Android 4 comes 5, and we haven't announced the timing yet, which we're still sorting out... In general, the Android release cadence is one major release a year with some maintenance releases that are substantial still."

There was no timetable for the update's release, but it is expected by the Q4 of this year.

Little other details are known about the updated operating system.
Tweet
Tags: Android Jelly Bean 5.0
<Reminder: Sony PlayStation Network will be down as of 3PM today >Huawei joins Tizen Association
Previous Next

Wonder if they'll be incorporating Linux for Android. There'll be dozens of quad cores out by then.

I haven't exactly seen Ice Cream on all the devices I thought it was going to go on to date... now their announcing 5? Crap.

What a waste, most phones haven't officially gotten ICS yet.
Google making an HTC move....

Originally posted by EzCeazy: What a waste, most phones haven't officially gotten ICS yet.
Google making an HTC move....

Google doing nothing worse than what Apple already do IMO. The difference with Android is that only the flagship devices are updated by Google. The rest are left purely upto their respective manufacturers to update accordingly. There are still a few devices out there running Froyo and will probably never get any further.

I think it was fairly obvious what the 'J' would be. They just confirmed what everyone was fairly sure of already.
Twitter @Simon_Constable

is jelly bean a dessert though? I'm looking forward to Google's answer to Siri and the advantages it'll bring.

The 5.0 isn't for phones. Its going to be optimized for tablets. That was posted on here awhile ago. But i cant find it right at this moment.

Stupid questions are for google. Learn how to use it, because everyone has a stupid question every now and then.

Seem to remember hearing that previously myself. However, I find it hard to believe that with Google seemingly releasing at least one new smartphone version every year (with new name each time), they would not release again this year. So whether that's 5.0 or something else, I think we'll see another smartphone update by the end of the year, or whenever they release the next flagship device.

Originally posted by Dmite30: The 5.0 isn't for phones. Its going to be optimized for tablets. That was posted on here awhile ago. But i cant find it right at this moment.

I wouldn't be so quick to emboss your 'stamped in steel' end of discussion, seal of the deal that 5 is 'just' for tablets or some form of backward compatibility. That would be like saying that Win 8 is just for PCs or just laptops from 2011 & later.

Sure, its immediate intentions are for the tablet environment, but the smartphone market is going to have to have some upgrading at some point & those consumers will be fixated on those changes being akin to similarities like those of 5 (in this particular case).

Otherwise, you have another Blackberry market out there with its proverbial dick in its hand & another OS floating around & another dumbass corporation thinking they can do whatever they want with another proprietary OS that nobody wants or understands on one platform again.
http://onlyinrussellsworld.blogspot.com
Comments have been disabled for this article.