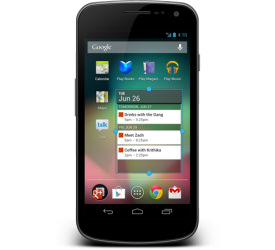 
Android is the most popular smartphone OS in the world, as of September 2012.

The operating system is available on smartphones and tablets, and even on one media player.

The first version of Android was released in October 2008 on the T-Mobile G1, Google's first "Google flagship" device.

There have now been 11 versions of Android released (each with a dessert name).

Android 1.0 - October 2008: 1.0 introduced most of what we know to be the Vanilla Android. Google Maps, Calender, Gmail, YouTube, Contacts, Search, Talk, Chrome browser, camera app, gallery, email, clock. Of course, we would be remiss if not talking about the launch of the Android Market, with under 50 apps.

Android 1.6 "Donut" - September 2009: 1.6 was a somewhat minor update, but it did introduce new now standard features. Voice search was added, as well as text entry search that could include your texts, contacts, web history and more. Text-to-speech was added, as well. The Android Market got its first re-haul and now included app screenshots, reviews and better search. Additionally, the upgrade added support for CDMA/EVDO, 802.1x, WVGA screens and introduced arguably the best GPS in the world, Google turn-by-turn Navigation for free.

Android 2.0 through 2.1 "Eclair" - October 2009-January 2010: just one month after Donut came another big update to Android, 2.0. Eclair added new multiple account sync for email and added Exchange support, a must-have for business users. Bluetooth was given support up to 2.1. SMS given auto-delete after specific number of texts and contacts can be selected to call, email, text by hitting contact photo.

Android 2.2 "Froyo" - May 2010: Froyo was one of the most major updates to the operating system in terms of speed, memory and performance boosts. The browser was given Chrome's V8 JavaScript engine, significantly increasing browsing speed. The app launcher was re-hauled to include browser/phone shortcuts. USB tethering and WiFi hotspots are added, as well as option to disable data access (to save battery). Extra high DPI screens are now supported paving way for tablets and higher resolution phones. Apps2SD becomes reality, and the Market is given another makeover.

Android 2.3- 2.3.6 "Gingerbread" - December 2010: A somewhat minor update, Gingerbread simplified the UI, turned all icons green, and added support for even larger screen sizes and resolutions (tablets). The virtual keyboard moves from not great to pretty spectacular, very intuitive and accurate even in voice input mode. Copy/Paste is improved, NFC (Near Field Communication) support is added waving the way for Google Wallet in the future. Audio effects and download manager are now standard, as is support for front side cameras. The video player adds support for WebM/VP8 and the system now uses a much improved power management software. 2.3.4 brought voice and video chat abilities to Google Talk, excellent features.

Android 3.0-3.2 "Honeycomb" - February 2011: Honeycomb is Google's first attempt at a tablet-optimized operating system. The Xoom was the first to run the software. The OS features a revamped UI with standard system bar and "soft" navigation buttons on the screen for back/home/menu etc. Multitasking is easy with apps running shown in the system bar including screenshots. Browser implements tabs, auto-fill, incognito mode and speed improvements. Supports multi-core processors, like Nvidia Kal-El quad core. 3.1 added much needed support for USB accessories like mice, keyboards, gamepads. 3.2 is most notable for compatibility display mode for Gingerbread apps.

A recent big bit of news has hit in the Android world, with Google purchasing up Motorola Mobility, maker of many Android devices for $12.5 billion. Google did so for the company's patents. More info here: Google to buy Motorola Mobility in $12.5 billion deal
Google is currently in a slew of lawsuits related to Android and its use of Java, among other tech.

The Android Market has reached one million apps, about even with Apple's app store.

45 percent of users have Android 4.0 or higher.